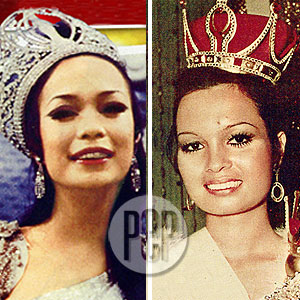 Gloria Diaz (left) and Margie Moran (right) are two Pinay beauties who conquered the universe with their charm, wit, and poise. Who's going to follow their footsteps? Let's wait and see.

When the Miss Universe pageant was launched in 1952, no one would have imagined that a simple beauty contest, founded by a California clothing company named Pacific Mills, would grow into an annual celebrated international event where nations, through their beautiful candidates, would vie for the crown of beauty.

FIRST TASTE OF VICTORY. It took 17 years before the country finally had its first Miss Universe titleholder. The 18-year-old Gloria Diaz bested 60 other delegates, who all converged in Miami, Florida, for the prestigious title.

That was in 1969, the same year that the U.S. made its historic moon conquest. Still reeling from such feat, host Bob Barker asked the top five finalists this question, "If a man on the moon would come down, how would you entertain him?"

With the entire world as her audience, a tense Gloria Diaz had enough wit and composure to knock down the winning answer.

"I guess since he has been in the moon so long, he would enjoy anything that an ordinary man would," said Gloria.

Gloria's victory would eventually serve her entry ticket to show business. She was hailed "Ang Pinakamagandang Hayop sa Balat ng Lupa," which also became the title of her launching movie.

Thirty-seven years later, entertainment journalist Ricky Lo would repeat the same question to the country's first Miss Universe in an interview. "I'll give him a cellphone so he can text me," she chided.

Bob: What would you like to do Margarita?
Margie: Later?
Bob: Yes, as a job?
Margie: Uh, I'd like to be a banker.
Bob: A banker? Why a banker?
Margie: Well, first, I'd like to follow my father's footsteps because he's a banker. And besides that, I'm taking up a course in business administration with courses in banking and finance.
Bob: You like counting money?
Margie: (She nodded in agreement.)
Bob: What will you do with ten thousand dollars if you win the Miss Universe pageant?
Margie: I'll invest it. Probably, I'll build a hotel?
Bob: A hotel?
Margie: Yes, and I'll run the business and my sister will manage it because she's taking up Business, uh, Hotel Management in school.
Bob: You know (addressing his statement to the audience), I've made a discovery. This girl could be the Onassis of the Philippines before she's through.

And the look-alike of former US First Lady Jackie Kennedy Onassis emerged as victor despite facing stiff competition against US bet Amanda Jones.

NEXT IN LINE. For the longest time, the Miss Universe crown has been very elusive. In 1999, Miriam Quiambao was so close to bringing home the prestigious title. And who would forget her famous fall?

In an interview, Miriam recalled the incident, "On May 21 we had the presentation show. This was where I tripped on my gown. There was a loose thread on the hemline, and my heel got caught in it, so I tripped. I got up because I felt I had to finish my walk. I was shaking and I was in shock, but all I could think about was how funny it was.

"Backstage, it hit me—the embarrassment and the shock—and I started to cry. Miss Panama and Miss Northern Marianas were telling me, ‘You were good!' Our choreographer Scott Grossman was saying, ‘I've never seen a recovery that fast!'"

During the actual pageant, Ali Landry—one of the anchors and former Miss USA—commented, "She had lots of class, a lot of poise actually. I loved her from the beginning." And the judges also agreed. They were impressed with how she quickly regained her poise, and proclaimed her as the 1999 Miss Universe first runner-up.

THE NEXT WINNING MOMENT? In the recently held 2007 Miss Universe Pageant, Pinay candidate Anna Theresa Licaros did not make it to the top five, but she succeeded in bringing home the Miss Photogenic award.

To date, if we talk about the ranking of the countries with the most number of Miss Universe candidates who made it to the top 5, the Philippines is currently occupying the 10th spot; in Asia, our country is next to India and Japan. Not bad! But we can definitely do better. Let's wait for the next winning moment!