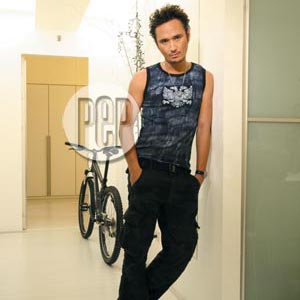 Behind John, in the narrow hallway leading to his bedroom, is a custom-made assembled bike worth P75,000 that has an enhanced aluminum body, Shimano wheels, and isoflow pedals. Besides showbiz, sports keeps the 6-foot-2 actor busy. Like close buddies Richard Gomez and Joey Marquez, John is into golf—and early this year, he bagged the first runner-up trophy in the Pro/Celebrity Amateur Division of the annual Omega Cup sponsored by Omega watches, held at the Wack Wack Golf a

The place that the actor has called home since 2004 is in the minimalist style, painted white from floor to ceiling to wall, with white furnishings and white decor.

That certainly does not reflect the fashion sense, the colorful life, and the happy-go-lucky personality of John Estrada. In fact, if Janice de Belen's ex-husband were a color, he would be anything but white.

Make no mistake, John is good-natured at heart. But his is an image more than occasionally splashed with intrigues and controversies.

In 2002, John's 10-year marriage to actress Janice de Belen was annulled. His ex-wife later brought him to court, accusing him of being a deadbeat dad who was not making good on his obligation to give monthly financial support to their kids—Inah, now 13; Moira, 11; Kyla, 8; and Yuan, 6.

Still, all's well that ends well. That issue has been settled, and the ex-couple are again on speaking terms. "But only where it concerns our kids," John himself points out.

Earlier, in 1998, persistent rumors had linked John to his Magandang Tanghali, Bayan co-host Vanessa del Bianco. The two vehemently denied there was something romantic going on between them. A few years later, they went public about their relationship. And in October 2006, the couple had called it quits.

For now, the 32-year-old actor lives alone in a 180-square-meter unit on the 33rd floor of a pricey condominium building in Mandaluyong.

When John moved in, the place was bare. A fan of minimalist design, he commissioned a highly recommended interior designer-Ed Calma, 2000 Ten Outstanding Young Men (TOYM) awardee—to execute the design he had in mind. With Calma and his team, John talked about the photos he had seen on the pages of Architectural Digest and other design magazines.

One venture that John has also put his money in is a small fleet of three air-conditioned jeepneys plying the route between Sucat, Parañaque, and Lawton, Manila. He paid P830,000 for each of the jeepneys.

The jumbo jeeps, as they are called, can seat up to 20 passengers. The minimum fare is P10 per person, and the maximum is P35. Since John put his fleet on the road about a year ago, each unit has been earning a respectable average of P5,000 a day. This means that any return on investment is light-years away, but John is simply proud to own the jumbo jeeps. "Maganda 'yong jeep. Bago, mabango, at saka malamig. 'Yong upuan niya, parang bus, nakaharap towards the driver ang mga passengers. Pero 'yong body niya, parang jeep."

It was John's father who first heard about the jumbo jeeps, and he encouraged his son to get into the business. The elder Estrada told his son to call the owner of the units for sale.

When John couldn't convince the guy on the phone that it was really him, he paid Mr. Orlando Marquez a visit. "Medyo natuwa naman siya sa 'kin, so I got the units, and now they're on the road. And dad ko ang nag-aasikaso sa pago-operate. Noong unang biyahe, sumakay ako. Tuwang-tuwa 'yong mga pasahero."

John has another business venture, in partnership with (among others) singer-actor Ariel Rivera and the Apo Hiking Society's Boboy Garrovillo, which is a franchise of Domino's Pizza in Pampanga. After eight years, it hasn't been doing well, and the group has decided not to open additional branches.

But none of this frazzles John. He is cool. He is crisp. He is white.