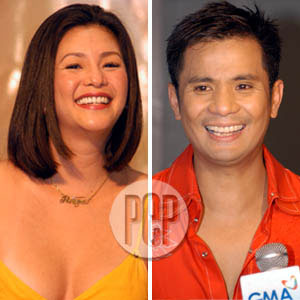 Singer Ogie Alcasid and girlfriend Regine Velasquez were reunited recently in the United States for a couple of shows.

Appearing alongside Concert King Martin Nievera and comedienne Ai-Ai de las Alas in a press conference held last June 20 at the Scientology Centre of Los Angeles, the lovebirds were obviously elated to be together as they gamely answered all personal questions thrown by some reporters.

The press con can be considered as the first official and formal public appearance of the controversial couple after Ogie's brave confession in YES! magazine's June 2007 issue.

"I'm very excited to be here," Regine, who was seated beside her beau, said candidly.

In a moment of introspection, Regine revealed that if deemed necessary, she is willing to give up her career in exchange of a sound family life with Ogie.

Ogie wasn't able to react during the tender moment, but Showbiz Central called him yesterday, June 24, to solicit his thoughts regarding the idea of Regine sacrificing her singing and acting career to fulfill her domestic duties, just in case the two finally settle down.

Once again, Ogie maintained that he never regretted coming clean despite some people's upfront display of disapproval. He felt that it was time for the world to know as even his ex-wife, Michelle Van Eimeren, encouraged him to finally admit his relationship with Regine.

Ogie happily shared that his two kids with Michelle, Leila and Sarah, had already met Regine and both were fond of his girlfriend.

Ogie just laughed off rumors that the two might make the most of their US visit to get married in Las Vegas, which is well known to host quick marriage ceremonies.

As a parting shot, John asked Ogie how much he loves Regine, in which the singer/songwriter/comedian/TV host replied briefly, yet meaningfully, before putting down the phone: "She is the last."