Sam Milby on Toni Gonzaga: "If she's in love, she deserves it." 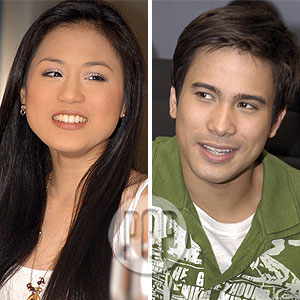 "I'm happy for Toni. Well, I think that's something that she's been really waiting for," says Sam Milby about Toni Gonzaga, who is now being linked to young director Paul Soriano.

How is it working with Angelica?

"I worked with her a little with her in Maging Sino Ka Man. She's really easy to work with. She's really great. Very nice and she could act... Honestly, I haven't had that much time. Yesterday is our first day of taping and I only had three or four scenes. Even in Maging Sino ka Man, I only had maybe three of four scenes with her. But so far, I've known her and she's very easy to work with," sabi ni Sam.

"Well, first stuff, she is with Derek, di ba? I would never get involved with somebody that is with somebody else. So, that's the first no," sabi niya.

"No, like last year, we we're really close and then after siguro You are The One, we weren't talking that much. Even during You've Got Me, hindi kami masyadong close. But then, when I visited her at her house when she had an accident, mas malapit. So, I'm still close but nothing, I guess, on that [love] level."

"I'll be happy for him if she's really in love, and the first thing I know about Direk Paul is that he's a Christian, too. Then if someone will make her happy, I'm happy," pahayag ni Sam.

"I'm happy for Toni. Well, I think that's something that she's been really waiting for. If she's in love, she deserves it," diin ni Sam.