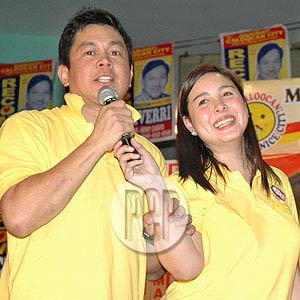 Minutes before the proclamation on July 1, Marjorie granted an interview with host Butch Francisco of Startalk.

She said that much as she wanted everyone close to her to be present, it was not possible. "My Mom is in the States as well as Gretchen, and si Claudine naman ang laki-laki na ng tiyan niya ngayon," laughs Marjorie.

She's in constant communication, though, with her sister Gretchen Barretto, who is currently keeping a low profile after the "kisscandal" with actor John Estrada several weeks ago.

"We talk every day," said Marjorie, refusing to elaborate on her sister's current situation.

"I don't wanna talk about that," she politely begged off when probed by Butch Francisco.

She generously answered though when asked about estranged husband Dennis Padilla.

Despite reports that an annulment between the two might finally take place, Marjorie answered in the affirmative when asked about the possibility of reconciliation.

"Matagal pa ‘yon," repied Marjorie, an implication that the couple have to work extra hard to settle their differences.