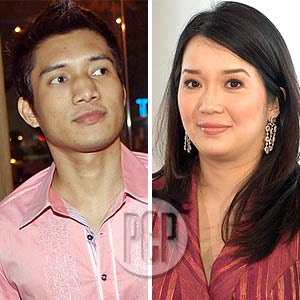 "It was the most beautiful resort I've ever been to in the Philippines!" says Kris Aquino about Discovery Shores, the resort where she stayed with husband James Yap.

During the pilot episode of Kris Aquino's new talk show, Boy and Kris, the TV host-actress confirmed that she and her husband James Yap went to Discovery Shores in Boracay. The said vacation was first reported by PEP (Philippine Entertainment Portal) last June 25.

Baby James's photo was shown during the July 2 episode of the new morning talk show. Kris narrates that the picture is actually an MMS [multimedia message] that her Yaya Ana took of her newborn son while she was at the exclusive Boracay resort.

In a press conference at 9501 Restaurant in ABS-CBN yesterday, July 2, PEP (Philippine Entertainment Portal) asked Kris to comment on her trip to Discovery Shores. The 36-year-old mother suddenly turned coy and plugged her own glossy magazine by saying, "Nasa K Mag lahat ng pictures. So, huwag na akong magkuwento because I wrote the entire experience there!"

However, she did share several tidbits about this unexpected trip, which some called a honeymoon after the marriage almost broke up over the Hope Centeno crisis.

"That was really a sudden trip. Kasi, si Deo [Endrinal, Kris's manager] has gone there sa Discovery Shores a few weeks prior to us and said, ‘Magugustuhan mo talaga!'

"So, James is invited to join the RP [basketball] team. In fact, he left [July 1] and we were all set talaga to celebrate our second wedding anniversary next week dapat, and we were supposed to have been in Bangkok."

"But because of his RP team commitment, nawala na talaga ‘yon. That was the last weekend before practice started. So, he said, ‘Let's go!' So, we went! And luckily, we were able to get a room.

"And ganda nung lugar! It's on Station One, right beside Friday's [TGIF]. It was the most beautiful resort I've ever been to in the Philippines!

Kris reveals that she regretted not bringing along her newborn, Baby James.

"Di ba, pag ganun kaliit, tapos iiwan mo, tawag ka nang tawag talaga? But it's so different lang talaga to have a baby now than to have had it thirteen years ago."

This spontaneous trip not only helped rekindle the romance between her and her husband, but it also helped establish the brotherly bond between her eldest child Josh and Baby James.

Another realization that hit her at the time was on how to prevent favoritism between her two sons. "The balance of the time—how to give equal attention and importance to Josh. And to emphasize the need na magmahalan silang dalawa," ends Kris.