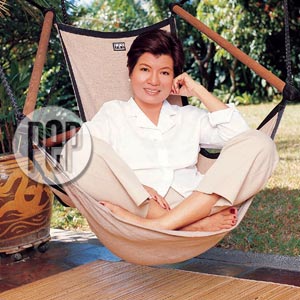 The hammock, also used by her mother, and the greens by the backyard can lull any soul to sleep. The bamboo rug (not in photo) is a find from a mountain in Ransang, Palawan. It cost just P400 plus P100 for the villager who carried it to the foot of the mountain. (Except that the hike took all of six hours!) To view the whole photo and the rest of the shots, click "more pictures" . (YES! March 2002 issue)

Cheche Lazaro was a kid growing up in the '50s when television was relatively new to these shores. Like any kid in her neighborhood, she was captivated by "this box with things coming out of it."

Years after, in high school she came upon a story by the Manila Times' Rod Reyes about opium dens in Manila and how he disguised himself as a drug dependent to get the true picture of the drug underworld. "That found a visual imprint in my mind," she says. It was an imprint that would stay with her for a long time.

When she finally decided to have a career in television, the story that captivated her years ago served as a model for what she wanted to do, investigative journalism. In 1987, Cheche became the founding president of Probe Productions, Inc., creator of "The Probe Team."

Of those start-up years, she says: "The opportunity to start this company was a big break in my terms kasi when we started nobody wanted to take us in." ABS-CBN was the first to take them in but cancelled them once ratings fell. For the next 15 years, GMA-7 would provide the base for "Probe," but a fall out between the two companies would bring the show back to ABS-CBN.

Cheche admitted having many trying, even low, moments. Like all television shows, "Probe" was also advertisement-driven. "I don't know how we have survived 15 years without getting rich..." she recounts. "It's just survival... We're okay but we're not swimming in money."

In a medium dominated by musical variety shows, Cheche and her team wanted to prove that an investigative news magazine can survive and to make a positive contribution to Philippine television. She notes, "Although ‘The Probe Team' does investigative reports that sometimes highlight what is wrong with (society), we try to present what good is being done as well. We don't believe in muckraking for muckraking's sake." She believed "in doing something that is going to make the Filipino feel good about himself and not to indulge in ‘We're the worst country!'"

Maybe it helps that she goes home to Forbes Park?

"It helps that you are not thinking about your next meal..." she answers candidly. She admits that it is really hard to weigh integrity and practicality. "You know, I can empathize with that, e, kasi I understand it. Wala kang pera, you want to make a clean living out of what you're doing and yet the circumstances force you to compromise."

For Cheche, "integrity has no compromise." She believes that Filipinos will keep to their principles unless pushed to the wall. It's just a matter of defining what being pushed to the wall means. "Some people will sell to any buyer 'no, like Doña Delilah in ‘John en Marsha' who said: ‘Magkano ka?' Yes, maybe everybody has a price but, you know, you set your own standards..." she adds.

"In the end you are the judge of whether you have kept up to that standard. Nobody else really can pass judgment on you except yourself—when you are with just you and your conscience. Then you can tell. ‘Did you do a good job?' And if your answer is ‘Yes,' then you have integrity to yourself."

On this score, many will say that Cheche Lazaro's reputation is made.
Read Next
Read More Stories About
Cheche Lazaro, homes
Post a Comment
Featured
Latest Stories
Trending in Summit Media Network