Ogie Alcasid introduces Regine Velasquez to US audience as "my love" 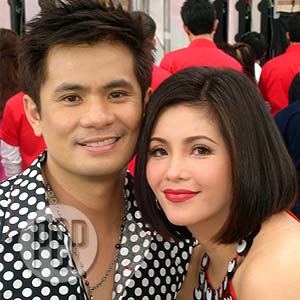 For the first time Ogie Alcasid boldly introduced girlfriend Regine Velasquez in a personal and intimate way. "This time I introduced her ‘Ladies and gentlemen, my love,'" Ogie vividly recalls in an interview with Startalk.


Ogie Alcasid is really a man in love.

Fresh from the success of his US shows with comedienne Ai-Ai de las Alas, the multi-talented singer-songwriter excitedly shared a story on one of the shows where he had girlfriend Regine Velasquez as a guest.

According to Ogie, he usually introduces Regine in a formal way. But that was before and things have definitely changed since they came out in the open regarding the truth about their relationship.

The moment, according to Ogie, was truly magical and he admitted being overwhelmed by his emotions.

"But it was so unforgettable. The way she looked at me, the way I looked at her. And people just cheering. It was magical. Hindi ko na ‘yon mauulit!" he laughed, obviously reliving that enthrallment.

Interestingly, Regine will be doing a show in Australia, which, as everyone knows, is the homeland of Ogie's ex-wife, Michelle Van Eimeren. The former Australian beauty queen, along with Ogie's two children, Leila and Sarah, are quietly settled in Australia since 2003.

According to Ogie, the venue of Regine's concert is far from where Michelle is staying, so the possibility of the two bumping into each other is remote.

On being asked if Michelle is now dating other men since the breakdown of their marriage, Ogie begged the press to leave his former partner alone and respect Michelle's privacy.

"Pabayaan na natin si Michelle. Michelle is enjoying her private life and that's one thing she has always requested from me," Ogie explained politely.