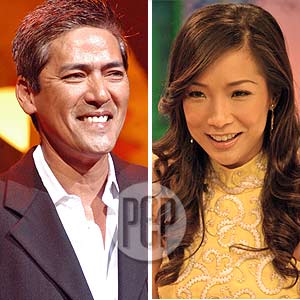 "We're both mature, kami ni Vic, and we don't have to act like twelve-year-olds," Pia Guanio comments on the issue that she and Vic Sotto had a public spat because of some relationship problems.


Host Pia Guanio finally spoke out on the rumor that her boyfriend, comedian-TV host Vic Sotto, was spotted dating someone else, a foreign-looking beauty to be exact, around the posh area of Serendra at the Fort, Bonifacio City, Taguig.

Sandwiched by fellow Showbiz Central hosts, John "Sweet" Lapus and Raymond Gutierrez, Pia issued her piece about the said incident as well as the rumor that she's no longer with Vic.

According to Pia, it's impossible for Vic to be with another woman on that supposed date for the solid reason that she was with him on that exact given day and moment.

Pia even showed a picture of Vic and herself having an intimate dinner and looking every inch a couple. The photo according to Pia was taken during the exact day and location where Vic was reportedly seen with another girl.

"Vic picked me up after 24 Oras and we had dinner together," Pia explained, still clutching her mobile phone where she saved her picture with Vic.

There's also no truth to another rumor that she and Vic had a heated argument, which was heard by some people around the condominium area where Pia is said to be staying.

Talks that all's not well between the pair even escalated when Pia failed to show up at Eat Bulaga! and 24 Oras last July 3, the day after the rumored split-up was reported by some showbiz writers.

"We're both mature, kami ni Vic and we don't have to act like twelve-year-olds," she reasoned out.

She owed up that there were some instances when they had a misunderstanding, like any other couple, but they go through it and settle everything privately.

More than anything else, Pia said she's offended by rumors that paint Vic as a womanizer who can't keep himself from being loyal to his partner.

And to prove that they're still very much an item, the sexy TV host went out of her way and greeted Vic on national television by calling him "honey" as the show was about to end.