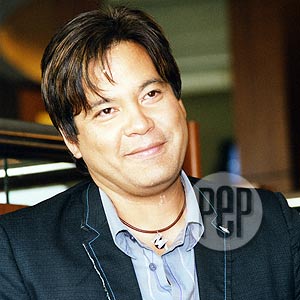 "I've been called many things but 'laos,' I've not been called [that] yet," Martin Nievera acerbically retorts to the comment of his disgruntled former producer that the Concert King has seen better days.

With the setback he experienced with his US shows still hounding him, the Concert King is back in the Philippines for some personal matters and to work as well.

Martin, who was left hanging by his concert producer, sat as a guest yesterday at Showbiz Central to answer some questions that were building up prior to his return.

First, Martin once again confirmed that the producer of his Las Vegas shows abandoned him, thus breaching the one-year contract they had agreed upon and leaving a messy trail behind him.

"I didn't lose a thing because I was never paid," Martin answered sharply when asked by Showbiz Central juror DJ Mo Twister about the money he lost because of the unfortunate incident.

"In theory, I could have earned a lot of money," he then replied vaguely.

It was earlier reported that Martin decided to push through with some concert dates, which means Martin himself had to shoulder all the expenses incurred by the shows.

"Well, I can't talk about it because there's a lawsuit and it's in the court," he revealed, refusing to divulge further the financial aspect of the ill-fated concert series.

Martin simply laughed off the comments made by his estranged producer, who labeled Martin as a "has-been," and implied that this was his excuse for pulling out.

"I've been called many things but 'laos,' I've not been called [that] yet," Martin wittingly disarmed the comment.

Martin also disclaims the news being spread by the producer that he had a room specially built for Martin costing $32 million.

"That's not the truth. You can ask anybody. Many, many people are suing him now," stated the balladeer.

There's also no truth to the rumor that he's preparing to formally seal his union with longtime girlfriend Katrina Ojeda, with whom he has a son named Santino. There are marriage talks according to Martin but it won't happen in the immediate future.

"I don't know but for sure everybody would know," he grinned.

Now that he's in town for a vacation, is he planning to introduce Santino to ex-wife Pops Fernandez?

"I don't know if I have to introduce anyone to Pops. I mean we're good enough friends," mused Martin, implying that everything between him and the mother of his two children are tight and that they're comfortable dealing with each other's personal affairs.

While being here in the Philippines indefinitely, Martin has lined up a couple of activities that would re-acquaint him with his fans in Manila, including some shows and cutting a studio album.

Despite the traumatic incident, Martin's not giving up on his dream of making it big in the US concert scene, which hopefully would lead to a fruitful international music career.