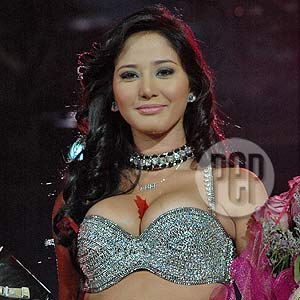 Proclaimed winner over 99 other sexy personalities twice in a row, Katrina Halili is crowned once more as FHM's Sexiest Woman in the Philippines for 2007.


With colorful confetti falling from the rafters to the catwalk, sexy young actress Katrina Halili made her triumphant return as the Philippines' Sexiest Woman for 2007.

For the second year in a row, Katrina bested 99 other equally sexy celebrities to take home the prestigious honor given annually by the country's leading men's magazine, FHM (For Him Magazine).

Sexy women graced the entire evening as even the sponsors paraded their own models to keep everyone on their toes before the actual program.

There was no letting up as soon as things finally start rolling.

The guest bands—Sandwich, Itchyworms, Kamikazee, and The Dawn—rocked the evening while gorgeous women paraded down the ramp. Kamikazee frontman Jay Contreras upped the ante by teasing the models as well as the crowd with his cheeky antics that completely egged the crowd on. The audience could hardly decide whether to pay attention to the comic singer or to the hot ladies strutting down the long podium.

FHM August 2007 cover girl Cristine Reyes surprised everyone with her new found confidence—a far cry from the indecisive young lady before her debut sexy pictorial a few weeks back. Cristine showed off her flawless beauty and impressive curves, which made all droolers look forward to FHM's August issue.

Joyce Jimenez reminded everyone that she's dubbed as the original "Pantasya ng Bayan" through a sizzling dance number that had everyone in awe. Many couldn't help but notice Joyce's much sexier frame compared to her figure before.

"If she can keep it at that until next year, I think she'll move up beyond her current No. 36 ranking," uttered one viewer, completely mesmerized with the sight of his "childhood fantasy."

New crowd favorite Ehra Madrigal elicited one of the loudest cheers from the audience when she was presented during the later part of the program along with other top placers. The sexy Pinay beauty nailed the No. 5 spot this year and even engaged fellow Lupin co-star Katrina in a close fight for the crown.

Aside from the honor itself, Ehra said that gracing FHM's pages greatly did wonders for her career.

Despite the stiff competition this year, last year's winner, Katrina, defied the odds with an unprecedented feat, clinching the title back-to-back.

Katrina's two stiffest local rivals for the honor this year, Angel Locsin (No. 2) and Angelica Panganiban (No. 3), both failed to show up last night due to personal reasons.

Proving that she deserves her crown, Katrina confidently took the long catwalk after a production number, while relishing the cheers and stares of the male audience. Multicolored confetti rained down from the rafters, sealing her victory and signaling the end of this year's contest.

When asked backstage about her secrets for staying sexy, Katrina once more uttered her famous pointers.

And this year, certainly, she is.