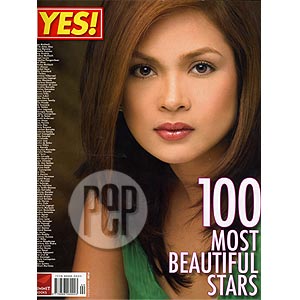 "With her distinct Filipino looks, Juday has proven that you don't have to be a mestiza to rise to the top of showbiz. Because of hard work, charisma, and a little bit of luck, she became the Nora Aunor of her generation," writes YES! about Judy Ann Santos.

Judy Ann Santos has been on the cover of several magazines, including Preview, marie claire, and Cosmopolitan. Now, the former child star and, at the moment, one of the most celebrated actresses in the industry graces the cover of YES! magazine's 100 Most Beautiful Stars.

"With her distinct Filipino looks, Juday has proven that you don't have to be a mestiza to rise to the top of showbiz. Because of hard work, charisma, and a little bit of luck, she became the Nora Aunor of her generation," writes YES! about Juday.

YES! editor-in-chief Jo-Ann Maglipon explains their cover girl choice: "We call her the girl with the It Quality—the girl with the special something that sets her apart from the traditionally prettier, fairer, taller, leaner stars around. And she is our choice to represent all the 99 other beautiful people we have chosen from showbiz."

Here are some of the stars that made it on the list:

Aga Muhlach and his wife Charlene's children, Andres and Atasha, made it to the "Tomorrow's celebrities" category. The fraternal twins are making heads turn with their infectious smile from their Daddy Aga and wit from Mommy Charlene. At five years old, they're already endorsing Jollibee's fast-food chain with their parents. It's all in the genes!

Although halfway around the world, in Paris, France to be exact, KC Concepcion still manages to sell magazines she appears in. Although her star-status is a given, with Sharon Cuneta as her mom and Gabby Concepcion as dad, she is one celebrity to watch. Like her parents, she is as attractive as she is talented.

Of Lucy Torres-Gomez YES! magazine says: "Her virginal face, svelte figure, and luminous complexion grace the covers of many magazines, and she has become an aspirational icon for readers." The soft-spoken wife of Richard Gomez is one beauty that cannot be ignored, hence landing her as one of the "Cover girls."

Continue reading below ↓
Catch the special issue of YES! magazine to know who else made it on the list of 100 Most Beautiful Stars. Now available!
Read Next
Read More Stories About
Judy Ann Santos, Aga Muhlach, Charlene Gonzalez, KC Concepcion
Post a Comment
Featured
Latest Stories
Trending in Summit Media Network