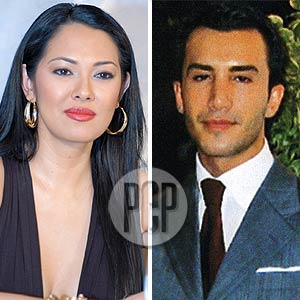 Yilmaz Bektas returns with a vengeance.

Talking anew to ABS-CBN Europe bureau chief Danny Buenafe, Yilmaz Bektas said that his estranged wife is in danger of being imprisoned for 12 years if she fails to answer all the cases against her before the Turkish court.

The Turkish businessman stressed that Ruffa committed a grave offense in his home country when she failed to reveal that she was still Mrs. Richard Daloia when she married him.

According to Yilmaz, the Turkish court is bent on pursuing Ruffa for faking vital documents to acquire a national I.D., driver's license, and Turkish passport.

He also revealed that the judge in charge of the case was aware of Ruffa's public admission that she was indeed married to a certain Richard Daloia in Las Vegas in 1999. Ruffa failed to mention this crucial fact when she filed and applied for personal documents in Turkey.

Yilmaz clarified that he has nothing to do with the four cases allegedly being prepared by the Turkish court against his estranged wife. He claimed that, in fact, he was serving as Ruffa's "legal protector," being deeply concerned with the case and its possible outcome.

Falsification of documents is a serious crime in the European Union and in Turkey. Ruffa is thus required to fly back to Turkey to face the charges laid against her.

Aside from Turkey and other Europe countries, the former Miss World Second Princess may also be blacklisted in the US, leaving her incapable of traveling outside the Philippines.

Yilmaz said that he's still open to the possibility of reconciliation with the mother of his two children, but that it will only be feasible if they find time to meet face-to-face to discuss important personal matters.

They still talk on the phone according to Yilmaz, though they've been arguing lately over Ruffa's showbiz career, which she quickly resumed after the controversial separation.

Ruffa watched the entire Yilmaz interview at ABS-CBN's watch room but refused to make comment. Her distress after watching the footage was obvious.