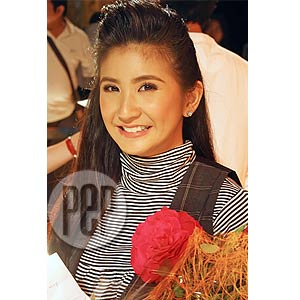 "I go to Umagang Kay Ganda and then I go straight to school after that!" said Rica Peralejo about her typical weekday schedule in an interview with PEP (Philippine Entertainement Portal) at the launch of Be Bench, the Bench model search. The actress is now a freshman at the Ateneo de Manila University, taking up Creative Writing.

She noted, "I'm very happy about it. First day was great. I was so excited. I couldn't sleep the night before... Nakakapanibago but in a very good manner. It's not as if naninibago na nahihirapan. Sobra akong excited kahit na naninibago ako."

Aside from her daily morning show, she is set to star in a new teleserye.

"[I'm] not nahihirapan with the subjects, I'm nahihirapan with work intertwined with studies. It's just a major adjustment for me na parang when I have tests and papers, it's so hard for me to balance it with my time, but I manage to do it naman," she said.

Rica proudly said that she is comfortable mingling with her classmates—even though most of them are years younger than she is.

"I have a lot of friends! I'm sad [though that] I don't have much time to make some more," she said with regret.

What was her classmates' reaction when they saw her?

She explained, "At first I think they were kind of, hindi naman starstruck, but they were surprised na there's an artista in the room. After a while, if you mingle with them, if you make halubilo, they will get used to your presence."

Just when Rica was about to share more about her school experience, a waitress handed her a bouquet of flowers.

"Is this for me? Kanino galing ‘to?" she said, obviously stunned.

The waitress said, "From an admirer po."

The note read: "Miss Peralejo, I hope you like the flowers. From an admirer."

Continue reading below ↓
It looks like Rica has a mystery to solve.
Read Next
Read More Stories About
Rica Peralejo
Post a Comment
Featured
Latest Stories
Trending in Summit Media Network