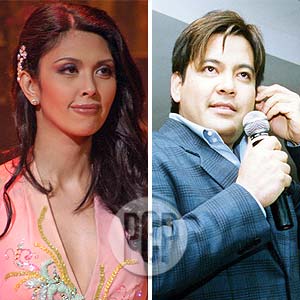 "I am not doing this for any kind of promo. I do not have a show here. I'm doing this because as a mother, I don't think it's fair for my kids," says Pops about tackling the controversy with her ex-husband Martin Nievera.

Pops and her estranged husband, Martin Nievera, have been on the news lately because of their publicized squabble. The misunderstanding reportedly started when news reached Pops that Martin's current partner, Katrina Ojeda, called her sons, Ram and Robin, "monkeys."

In an interview with the showbiz-oriented talk show of ABS-CBN last week, Martin has already begged off interviews regarding the matter because Robin asked him to do so.

"A lot of words are being exchanged, a lot of voices. What's important now is I listen to the voices of my children," said Martin.

Katrina seconded, "I would like to say that I've apologized to Robin and Ram for any words that were said that were taken out of context. And Martin knows and the boys [Robin and Ram] know that I would not say anything that would hurt Martin and the boys. I treat them like my own."

Pops agreed that they shouldn't wash their dirty laundry in public, at least for the kids' sake.

"That's why I kept quiet for a while. That's why I didn't say anything kaya lang, I also talked to Robin. I said, ‘The stories that are coming out are not true. I did not know about this nine years ago. Nine years ago, ten years ago, eleven years ago... Believe me, I remember everything that has happened and that has been said to me, but I have not said anything about it because ako lang ang nasasaktan. Sabi niya, ‘Well Mom, if you feel that you have to,'" she stressed.

"MONKEYS." The Concert Queen who timidly and sparingly spoke about her marital problems with the Concert King—even when Martin was reportedly having an affair—finally broke her silence.

She narrated: "As a mother, masakit pag nakakarinig ka ng mga bagay-bagay na tungkol sa mga anak mo na hindi maganda. Papaano ko pinaniwalaan ang mga nairinig ko? Dahil hindi lang isang beses ko narinig. Narinig ko iyon, and may I correct this, I only heard about it when I was in Las Vegas and that was only probably two months ago.

"Tinext ko si Martin. Sabi ko, ‘Marts, I really really have to talk to you because now it's about the kids. And before, I couldn't even say what the topic was. Marts, alam mo naman ako. Wala naman akong sinasabi, e. Pero sinabi ko rin naman sa 'yo na when it's about the kids, you know naman I live for these boys. I'm very very protective.' Tinext pa niya ako. Sabi niya, ‘Pops, if you're hurting then I'm hurting because these are my kids...'

"A week after, nagkaroon kami ng chance na makapag-usap. Okay naman ‘yong umpisa. Sabi ko, ‘Marts, this is what I've been hearing. You've never heard from me. I never said anything, but when it comes to the boys, you know that I will have to say something.'

"So sabi ko, ‘It hurts me that I would hear certain stories like this.' So noong sinabi ko ang istorya, nagalit siya kasi ang gusto niya malaman kung sino ang nagkuwento sa akin. Ang hirap magdamay. Ang sinabi ko na lang, ‘That's not important. The most important things is this was said.' And he remembers the kuwento and he said [that it] was a joke. So I said, ‘I don't find it funny. And if I were her [Katrina], I would also be very careful with the things she says about the kids.'"

POPS'S BROOD. "Martin and I had a long talk when we were both in Ireland and he finally told me na magkakaanak siya. Sinabi ko sa kanya at pina-promise ko sa kanya na, ‘Martin, whatever happens I'm okay with the new baby, but you have to make sure that your kids are fairly treated,'" said Pops.

She stressed, "Robin and Ram, I live for these boys, literally, physically. I never complain. Nagtataka kayo bakit nasa party [ni Santino] at nakikita pa rin ng mga anak ko sina Martin and Katrina? Because at the end of the day, I know what my kids feel.

"They rarely see their dad. In a year's time, they see their dad, what, two months? Pagdadamot ko pa ba ‘yon? Hindi naman siguro importante sa mga anak ko na kung ano ‘yong sinasabi niya about them, pero sa akin, importante ‘yon. I think at the end of the day, they just really want to be with their dad. They want to learn more about him. As I said, it's also important.

"For us to fight, I think it's crazy, but I am so tired of twisiting of mga story because this is the story. I will not lie. I will not lie about anything, especially when it comes to my kids."

MARTIN. Although Pops and Martin have been separated for nearly a decade, the two maintained a united front, especially when it came to their growing boys. It is only with this issue that both took to their own corners.

"I'm very very upset, if it's not obvious. I think I'm crying kasi hindi ko mailabas ‘yong anger ko. As a matter of fact, I had to turn down [ASAP] because they wanted a number with Martin. I can't because hindi ko pa ma-explain ‘yong sarili ko," said Pops, sobbing.

She continued with a message to her former husband: "I just wish that Martin is not anymore as impulsive and as short-tempered as he is. Because at the end of the day, I never want to fight with you. It's so hard to fight with you because you have this great talent for convincing people what your story is. I think that's also a reason why I remained quiet. Who wants to fight?

"I wanted to be your friend throughout this whole problem we had. Kaya lang, di ba, ang usapan natin, when it comes to the kids, you and I are supposed to fix it? You're not supposed to fight with me. I'm fighting for our kids. I think that's what also hurts me the most. Parang inaaway ba kita, e, iyong mga anak natin ang pinag-uusapan natin?"

KATRINA. "If it comes from [Katrina], it's very touchy because of what she represents in our lives. Do I have to repeat what she did? She broke up my family," said Pops in a previous interview with entertainement columnist Ricky Lo.

That statement was one of Pops's rare public remarks about Martin's new partner, Katrina.

Katrina has already apologized to Robin and Ram.

"If you really are sorry, then you have to know what you're sorry for. Martin keeps twisting the story. No, I did not know about this story nine years ago. I don't know if it happened nine years ago, three years ago, yesterday. It doesn't really matter. As a mother, I am deeply deeply hurt, because I can never imagine myself doing that to any other child," reacted Pops.

She gave Katrina this message: "If you do love my kids, sana you love them not just when Martin is around. Sana you will continue to love them even if my kids are thousands of miles away from you. Why? Because, I will admit this, when my kids go there for vacation, I get nervous. My kids are far away from me. I want to make sure that they are treated well. And in a way, I am trusting her and entrusting her with my kids, so it's very very important for me [that they are treated well]."
Read Next
Read More Stories About
Martin Nievera, Pops Fernandez, Katrina Ojeda
Post a Comment
Featured
Latest Stories
Trending in Summit Media Network