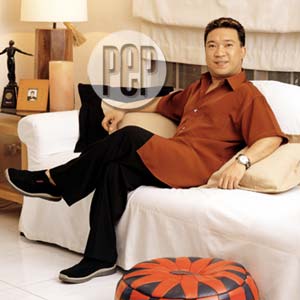 Roderick's alma mater, UP, has honored him with a Most Outstanding Alumnus Award in the field of performing arts. The statuette has been given a special place in his living room. (YES! April 2002 issue)

Roderick "Kuya Dick" Paulate is one likable star. Hanging around his dressing room at ABS-CBN's defunct afternoon show "Magandang Tanghali, Bayan" (MTB) can tell you that. People simply come in and out of his tiny space. Practically everyone is welcome.

From the writer who enters to brief him about the questions for the day's "Winner Take All" game portion, to Claudine Barretto who pays him a short visit to say "hi!" because she happened to be nearby taping for Boy Abunda's "Private Conversations." From the barong-clad ABS-CBN utility man who quietly hands him a slip of paper with names of friends he would like Kuya Dick to greet on air, to a fan who gives him a simple purple leather necklace, which he quickly wears, saying it complements his pink polo shirt. From a TV crew that wants him on-cam speaking about his close friend, director Olivia Lamasan, to co-host Amy Perez and TV directors Arnel Natividad and Edgar "Bobot" Mortiz who drop in just to chat.

Obviously, Roderick is an easy fellow to approach.

So easy that at one time he was sent an S-O-S message from the "MTB" staff to come and host, fast! The show was in panic mode: airing in a few minutes, it had no host in sight! Roderick, then taping an episode of "Da Pilya and Da Pilot" at the new ABS-CBN building, and scheduled to appear in the show at a later call time, came huffing and puffing to the "MTB" studio. That was a good five-minute sprint! He was still in the other show's costume of maong shorts and striped shirt. When he got there, co-host Randy Santiago had arrived; Roderick let out a sigh of relief.

The point is: how many stars can you S-O-S like that?

Those who know him say he's more than just professional and cooperative, he is downright kindhearted.

He doesn't mind saying he's this way because there's so much love to go around in his family. "Natutuhan ko sa pamilya ko," is how he puts it. He is the youngest among nine children—even if everyone in showbiz calls him Kuya Dick. It is a brood, moreover, that feels very close to their mother, Paz, a woman Roderick openly announces his love for in public.

"We, my siblings and I, love her so much," he says. "She's our queen. Ganoon namin siya kamahal."

At a very young four, Roderick began acting for the movies. But it was years later, with his gay roles, that he would click with the masses.

As far as he can recall, his first gay outing was in the critically acclaimed High School Circa '65. "Doon naman, I was nominated for Best Supporting Actor considering na 15 or 16 pa lang ako noon. I was the comic relief of the movie."

Bibeth Orteza, who played a teacher in High School Circa '65, created a gay character for him in the sitcom "Tepok Bunot." "Nag-hit 'yon," says Roderick. Then a producer gave him the lead role in Charot, a movie inspired by Dustin Hoffman's gender-bending performance in Tootsie. Before Roderick knew it, other offers to do gay roles started coming his way, with one of them from a very persuasive line producer-actress.

"After Charot, ayoko munang tanggapin ang mga gay-gay roles," he says. "But it was Charo Santos who convinced me to do a gay movie where I would be paired with Maricel (Soriano)." The project was Regal Films' Inday, Inday sa Balitaw which ended up being a huge success.

However, he admits that, initially, his interest was elsewhere. He was once host—and director for the documentary portion—of the youth-oriented public affairs program "KB Kaibigan" on the government-owned Channel 4. He says, "Ini-interview ko political people." And for co-hosts, he had former undersecretary of tourism Ram Antonio and Jackie Kookoorichkin. "Ako 'yung medyo matigas kasi 'yung isa taga-La Salle, 'yung isa taga-Assumption. Ako 'yung taga-UP."

He goes on: "Para makita mo 'yung conflict... I wanted to do public affairs hosting but at the same time I was a commercial actor. Kung hindi ko gagawin ang public affairs, mas gusto kong gawin 'yung drama roles. And ayokong gumawa ng gay roles because I was a UP Student Council member."

Roderick, entering the University of the Philippines in Manila as a Political Science major, had been elected freshman representative. "Our Student Council president then was [former editor-in-chief of The Manila Times] Malou Mangahas," he volunteers.

But, he chuckles, his father was wrong. "Because when I was taking Theater Arts, professors ko mga political detainees! 'Di ba si Behn Cervantes nandodoon?"

He joined the theater groups Peryante and Dulaang Laboratoryo and once portrayed Ninoy Aquino in a play mounted at Ayala Museum. He recalls dramatically that while he was delivering a monologue about revolution, there was a commotion outside the building, while inside, the audience and the actors smelled tear gas!

Dangerous as those times were, Roderick says they gave him a sense of satisfaction. "I was enjoying it a lot," he confesses. "At the same time, politically aware ako. Tapos nasa performing arts pa ako. So, balance."

Even then, his days as a student activist seem to have found their mark. Roderick reflects: "It made me closer to the masses. I was able to do it in theater. I was able to do it sa pakikisalamuha ko sa kanila.... Kung hindi ko man magawa ang pagiging aktibista ngayon, nakatulong ang karanasan ko sa pananaw ko sa masang Pilipino."

As such, he sees something in his role as one of the country's top comedians today. "If I can make them forget their problems even for just two minutes or five minutes, that's a big thing for me already."

Whether it's obliging a fan angling for an autograph, hosting a game show, giving in to pabati requests, or assisting shows in emergencies, Roderick Paulate is happy to help.