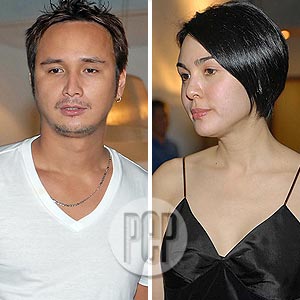 Gretchen Barretto and John Estrada both attended the birthday party of talent manager Douglas Quijano held last Wednesday, July 25, at the Greenhills residence of Richard Gomez and wife Lucy Torres-Gomez. But this time, they did not bump into each other, according to Philippine STAR columnist Ricky Lo.

Douglas apparently made sure that the controversial actors would have no chance to see each other, to avoid any tension and discomfort between them and among the other guests.

John and Gretchen became very controversial a few months back after a photo of them kissing each other circulated in the Internet. The photo was taken with John's cell phone during Rufa Mae Quinto's birthday party. Gretchen never denied the authenticity of the picture; and John issued an apology to the actress and her immediate family. The two have avoided talking about the issue since then.

In his column today, July 27, Ricky wrote that Gretchen arrived at 6:30 p.m. and was accompanied only by her aide. John, on the other hand, arrived at 9:30 in the evening together with his current girlfriend, Brazilian beauty queen Priscilla Meirelles. (Priscilla was Marc Nelson's ex-girlfriend.) Gretchen had already left the party, thirty minutes before John's arrival.

Gretchen was reportedly in good spirits and gamely allowed Ricky to snap pictures of her with birthday celebrant Douglas, Regine Velasquez and Ogie Alcasid; and even with John's ex-wife, Janice de Belen.

Ricky asked Gretchen if the "kisscandal" broke her spirit. "Shaken but not broken. You know, you wake up the next morning and realize what you did the night before and you can only regret it," she replied. As always, she expressed thanks to her partner, Tonyboy Cojuangco, for his unconditional love and support.

As for their daughter, Dominique, Gretchen said she pays little attention to the issue. But Dominique remarked, "At least you didn't go to jail like Paris Hilton."

"Dominique studies in a British school. She doesn't read the papers and she seldom watches TV," said Gretchen.

There are lessons to be learned of course, and Gretchen, aside from staying away from "bad" company, revealed another one: "Stay away from suspicious-looking people with cell phones!"