Lucy and Juliana: A mini-me story 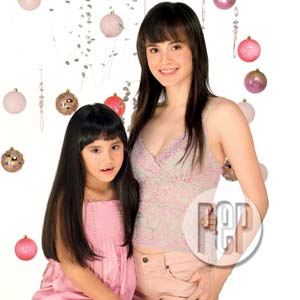 Juliana, unlike her mother, is not too fond of jewelry. "She's not as mahilig," says Lucy. "Maybe it's her age." What Juliana likes is anything and everything that comes in pink. "When we went to Singapore, all she wanted was pink bedsheets and Hello Kitty." (YES! Deember 2006 issue)

The name Lucy Torres-Gomez is usually preceded by adjectives such as beautiful, lovely, sophisticated, sexy, quick-witted, well-mannered, talented, and intelligent.

All these make her one of the country's most celebrated women.

For Lucy herself, however, there are no celebrities other than daughter Juliana and husband Richard Gomez. Inside the Gomez household, Lucy turns into her daughter's biggest fan, always watching out for Juliana's new discoveries and tricks.

And just like any ordinary mortal and workaday mother, Lucy finds her mother role put to the test whenever Juliana gets sick.

"Last August [2006] lang, she was hospitalized three times," Lucy says, still frantic at the memory. "First, she got a scar on her eyebrow that was caused by a steel display rack that fell on her when she tried to dangle from it like a small monkey.

"Mga two weeks later, I had to rush her na naman to the hospital for suspected dengue. 'Buti na lang it wasn't. It was systemic viral infection.

"Then, two weeks later ulit, I had to rush her again—on her birthday [September 8]—to the hospital for the same thing, systemic viral infection. 'Buti na lang it was nothing. It was just in the air, and her immune system was low."

Lucy admits she's to blame. She's an insomniac, and at the same time a permissive mother who has tolerated Juliana's staying up late, mimicking everything her mother does. That was what caused the lowering of Juliana's body resistance.

It happened when mother and daughter were in Ormoc, Lucy's hometown. Says Lucy apologetically: "She'd sleep as late as she wanted to, 'cause there was no school the following day. As in, super-late nights. Hay, I only have myself to blame talaga."

It didn't help that Richard, the more sensible person around in times of crises, was out on a location shoot at the time.

"Ako kasi," Lucy explains, "when you say, ‘Go to the hospital,' as much as possible, I don't want to go unless there's something seriously wrong na talaga. I grew up with the mindset na pag hindi pa na-hospital, okey lang 'yon. Si Richard naman, for every little thing, ‘Ipatingin mo na 'yan sa doctor for your peace of mind.'"

The experience taught Lucy a lesson.

While the crisis was happening, the ever-prayerful Lucy says she doubled the dose of her prayers. But she can laugh about it now that it's over.

"Whenever she's sick, you only see half of Juliana," Lucy says, laughing. "That's because she's covered with all the saints and all the crucifixes. Parang, daanin na ito sa dasal, hindi na kaya ng medisina."

Not content with saying her own prayers, Lucy called up her mom, Julie Torres, and asked her to pray, too. "Si Mommy naman, she has all these madre na friends who'd help us pray."

At one point, Lucy says, she came close to taking the advice of Juliana's Yaya Lita: to let the girl take an albularyo concoction. The nanny said she had succeeded in curing two members of Lucy's domestic staff, who also suffered from a high fever at separate times.

Wati, Lucy explains, is the Visayan word for earthworm.

Still, the thoroughly modern Lucy can't help but be amazed by the quackery practiced by Juliana's yaya. Or is it unusual methods of traditional medicine?

These days, Juliana is back to her usual energetic six-year-old self. A preparatory student at a Montessori school, Juliana is all set to enter grade school next school year.

At a recent Parent-Teacher Association (PTA) meeting, Lucy says, she found out that the teachers had been training Juliana's class in "how to learn to enjoy quiet time." And Lucy has noticed the big difference in her daughter: "Before, gusto niya noise. Now, she is really learning to enjoy quiet time."

"I was so happy in that school also," says Lucy. "She was happy din. They teach the practical side of life—'yong how to arrange flowers in a vase, to clean up after your own mess, 'yong practical stuff. They make learning fun. Like when they teach math, it's not just adding one plus one. They make it fun. I'm just happy there. But nasagad na niya all levels, e. She has to move out."

Juliana insisted, however, that she would not move out of that school unless her best friend and schoolmate, Shanika, went with her. Shanika did. "They're inseparable!" Lucy laughs.

At home, Juliana is beginning to assert her territorial rights. In fact, she's already requesting that she be given a room of her own. Right now, she sleeps with her parents.

"Almost every day, she's asking," Lucy sighs. "But only because she wants to decorate it her own way. She wants everything pink."

Lucy, who can hardly catch up with Juliana's precocity, came up with a compromise. She gave Juliana her own bed, beside the matrimonial bed.

Juliana, who already has strong likes and dislikes, is also into make-believe office mode.

"She likes working at her desk," Lucy laughs. "She's writing her own letters, or she has paperwork to do. You know how kids are, they just pick it up from what they see, di ba? Like me, I always work at my desk. "She sees me do paperwork, so she likes filing-filing din, like mga receipts.

"Juliana's desk, it's decorated the way she wants it talaga. She has her own stapler. She has a mini-version of whatever I have. But hers lang is in pink.

"She's very organized. I'd like to say that she got it from me, but others say na it's because of her sign—she's a Virgo and they want things daw talaga a certain way.

"Si Ben Chan ang first na nagsabi noon, e. Sabi niya, ‘Virgo ba itong anak mo?' I said, ‘Why?' Kasi daw, when we were having dinner, she was running around the table, and there was a bottle of Tabasco with the cap off. Midway, parang Juliana stopped lang, then put the cap back, then ran again."

Juliana's efforts to be like her mother-besides having her own office desk at home—is best seen in the way she dresses up.

And why not, when the kid and the mommy end up looking this good!