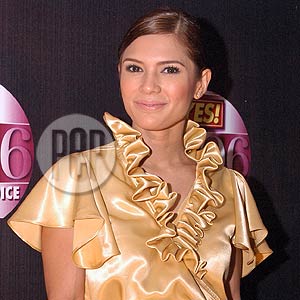 Despite the separation, some people aver that it is impossible for Vina Morales's boyfriend Cedric Lee not to bump into ex-wife, Judy Lee, on some occasions and events as both move in the same circle.

Showbiz Central caught sight of Vina Morales's businessman boyfriend, Cedric Lee, and his ex-wife, Judy Lee, during an event. Although the reportedly estranged couple were never seen socializing together, some reporters couldn't help but wonder about the true status of their relationship.

When Vina and Cedric's relationship became public knowledge, some people criticized the singer-actress for hooking up with a married guy, even calling her a "homewrecker." Cedric defended his celebrity girlfriend by saying that he was already separated from his wife when he pursued Vina.

"Vina is not a homewrecker. Vina will not knowingly, willingly, and purposely enter [a] relationship that would cause the breakup of a family. I've been separated for a quite a while before I met Vina. In fact, I have two other relationships before I met her. When I met Vina, I was technically single. I'm in the process of simplifying my life in that means [sic] that the issue of annulment has been raised. However, I will not elaborate on this matter out of respect for the privacy of all the parties involved, especially that of my kids," wrote Cedric in a statement he furnished to some entertainment reporters.

Showbiz Central confronted Cedric's former wife and probed her current relationship with the father of her two kids.

"I'm sorry I have to pass the question," she laughed.

"Eleven and 8 [years old]... two boys," she said when asked for some details about their children.

Judy, however, revealed that she and Cedric, and the children as well, are okay in spite of their unusual domestic setup. She makes sure that God is in the center of her life. Judy is very close with celebrity couple Jessica Rodriguez and David Bunevacz. In fact, she is reportedly a business partner of the couple in one of their ventures.

Judy's refusal to answer the question regarding her relationship with Cedric triggered some to think that perhaps it is still possible for the separated couple to reconcile.

Showbiz Central tried to contact Vina, who is currently in the States, to get her reaction but to no avail.