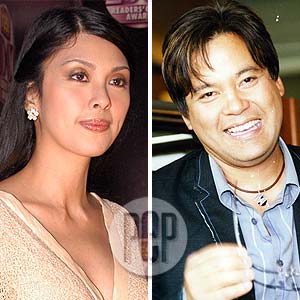 After several years of being separated from ex-husband Martin Nievera, the father of her two kids, Pops Fernandez says she's completely gotten over him. But she has secrets to expose about their breakup.

Singer Pops Fernandez shook off opinions that she's still harboring special feelings for ex-hubby Martin Nievera and is still bitter about the breakdown of their marriage.

The estranged couple were verbally slugging it out lately in the papers over an incident in which Martin's longtime girlfriend, Katrina Ojeda, allegedly called Pops's sons with Martin "like monkeys."

The Concert Queen said that she already accepted the separation a long time ago, though Pops never hesitated to directly drop Katrina's name as the source of the split and even said that Katrina had always been their main problem during the marriage.

Pops clarified that the she's only out to defend her two sons and not because she wants to engage Martin in a verbal tussle before the public.

She felt that Martin missed the entire point and made much effort to defend Katrina instead of the "boys" and the real issue on hand.

HIGH-PROFILE SEPARATION. In Martin's recent guesting at QTV 11's The Sweet Life, Martin reportedly said a mouthful of endearing words to Katrina and her traits, leaving some people wondering if Pops didn't possess those qualities, thus triggering Martin to flee the marriage and look for someone else.

"I am faithful," Pops quickly deflected John before slinging the word "unfaithful" to her former husband, which elicited laughter not just from John but from the audience as well.

In a moment of introspection, Pops revealed the painful price of being a celebrity when it comes to privacy, especially regarding sensitive family issues.

"But, unfortunately or fortunately, I don't know what it is, I don't know the right word to use for now... He is Martin and I am Pops and, lalong-lalo na siyempre noong araw, we were the tandem to beat, we were the husband and wife to beat, we were the team to beat. So kaya siguro siya napakalaki at lumaki, and it ended up the way it is now," she reasoned out in response to Martin's supposed regret that the separation had generated much attention and continues to be highly publicized.

UNANSWERED QUESTIONS. But despite all the news and the obvious reasons that made Martin fall in love with another woman, Pops admitted that there are still a lot of questions left unanswered on why the once perceived perfect marriage crumbled.