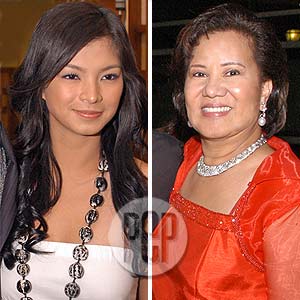 According to GMA-7 SVP for Entertainment TV Wilma Galvante, all the executives of the network are fully aware and informed about the entire Angel Locsin issue; all statements issued by any of the executives have the full consent of the big bosses.

GMA-7 insiders vehemently downplayed accusations that the network is instigating a smear campaign against its former prized talent, Angel Locsin.

There's also no truth to the rumor that Atty. Felipe L. Gozon, GMA Network Chairman and CEO, became upset with Wilma Galvante and accused the SVP for Entertainment TV of mismanaging Angel Locsin's contract, subsequently prompting her to transfer to ABS-CBN.

Wilma Galvante voiced the same thoughts and reiterated that the top management has full knowledge of what's going on and what's being said regarding the issue. She was refering to the rumor that some of the network executives were allegedly not pleased when Galvante, along with Program Manager Redgie Acuña-Magno, appeared in a taped interview last Sunday on Showbiz Central.

Galvante once again said that the network doesn't want to dwell on the issue anymore as they feel that they already spoke enough about the controversy.

"We've aired our side already and we're putting it to rest. Why give her [Becky] more airtime? We have lots of other things to do."

Presently, the entire GMA-7 team is said to be more excited in promoting Marimar and are seriously grooming Marian Rivera as their new banner star after Angel.