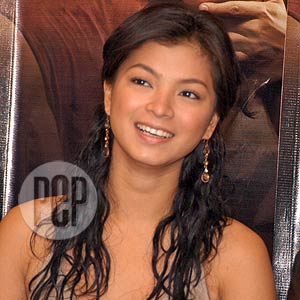 What awaits Angel Locsin's return? Brighter skies or dark clouds? A warm or lukewarm welcome from the Pinoys? Better or bitter career? Her supporters are confident that, just like the roles she portrayed in the past, she is going to win this battle.

CLOUDY SKIES. Skies darkened for Angel in August 2005. Reports say that in Angel's condo unit, she and her manager Becky Aguila had a heated argument. The young actress accused Becky Aguila of mishandling her money. The story goes that when Angel asked an accountant to audit her finances, she found there discrepancies.

Two months after, Angel confirmed the incident in an interview with Startalk. Becky Aguila aired her side of the story through Cristy Fermin's column. Becky's twins spoke on her behalf. The latter claimed that in the course of the argument, Angel pointed a finger at their mom and cursed her.

For more than a year, the two were not on speaking terms. An article put out by June 2006 issue of Hi! magazine reported that Becky was said to have told her ward that Angel's contract with her was "for life." According to lawyers that PEP consulted, there was "no such thing." Moreover, the actual contract indicated that the young actress was tied to her manager only until December 2006.

Then came the breakup with Oyo Sotto.

Oyo and Angel called it quits on December 26, 2006, or just two months after they went public with their relationship. In a PEP article dated January 2, "lack of time" was said to be the cause of the breakup. Due to the actress's hectic schedule, boyfriend and girlfriend "barely managed a ‘hello' and a ‘good night' over the phone at the beginning and end of the day." Fame indeed has its price, and it cost Angel the relationship that seemed perfect at the time.

In the aftermath of Oyo's and Angel's love story, the feuding GMA-7 primetime princess and her controversial manager reconciled.

On February 5, Becky said to PEP: "Angel and I patched up our differences, came up with an agreement, kissed and made up with my twins last Dec. 27 [the day after Angel's breakup with Oyo]. Apparently, the complaint was filed earlier than expected and Angel will formally withdraw the case.

"Past is past, everything is water under the bridge. We've been separated for a year-and-a-half. We're both making up for lost time. I'm spending more time with her and [keeping] closely in touch when I'm not. She also finds time bonding with my twins. We're even closer and sweeter the second time around. I'm glad that all's well that ends well with my twins and Angel. Finally my 'prodigal' daughter is back."

Some said it was out of the kind heart of the young actress that she chose to forget her issues against Becky. Others assumed that Angel had lost Oyo, so she was turning to Becky, or that Becky made the move to get Angel back since Oyo was now out of the picture. Others said that Becky had a "hold"on Angel.

The controversies did not rock Angel's career. The public saw her as "matiisin" at "mabait" in the midst of tribulations. They loved her even more.

THE NETWORK STORM. Becky's July 22 announcement on "The Buzz" saying Angel was making the transfer from GMA-7 to ABS-CBN came as a shock to everyone.

Weeks before GMA-7's Asian Treasures went off the air on April 29, an article posted on PEP squealed on Angel Locsin's attitude problem on the set of her TV series with actor Robin Padilla. The attitude problem reportedly consisted of Angel shouting at elders like her fight instructor and generally being difficult on the set. Her co-stars and even GMA-7 management came to her defense and denied the rumors.

On May 14, PEP contributor Dinno Erece reported that Angel's next project would be the Pinoy version of Marimar. But weeks later, on June 8, he posted two articles: one talked about Angel refusing the role of Marimar; another, that the GMA-7 management never formally offered the role to Angel.

Subsequently, a GMA insider told PEP that the Kapuso network simply did not want to preempt the project by announcing who was going to star in their new primetime investment. In this light, the talk spreading about Angel not doing Marimar was seen as an effort to create buzz for the upcoming teleserye.

Then "talent fee" issues arose, followed by news about Angel's non-renewal of contract with GMA Artist Center. There was also an item saying that Angel was staying with GMA, the network that made her the big star she was today. Then followed stronger ripples of talk that Angel, through her manager, had actually started sending feelers to the Kapamilya network even as she and her manager were sitting at the table with the Kapuso executives.

In the end, the latter rumor would be proven true.

On July 22, Becky Aguila announced to the media that her most-prized talent was 80 percent sure of making the move to ABS-CBN.

Everyone was shocked—and, if GMA-7 management is to be believed, the network most of all.

The Kapuso executives (GMA-7) claimed they were totally clueless about the transfer. Insider information coming from the top levels of the network reveals: "Angel told management that she could not sign the new contract with GMA because she did not know when she would be back from a projected London trip, and that it would be unfair to GMA to make them wait indefinitely. Management was shocked to find out that even as they were sitting at the negotiation table, their prize star was already committing to ABS-CBN."

The Kapamilya executives (ABS-CBN) kept quiet for the most part during the rocky period. Insider information coming from the top levels of that network reveals: "ABS was very interested in Angel. Talagang interested. It has been looking for female stars to partner with its male stars, particularly with Piolo Pascual. Judy Ann [Santos] already had Ryan [Agoncillo] and they were a hit, so there was no reason to break that up. Claudine [Barretto] had just had a baby and was not expected to be in fighting form till after a couple of months. Angel would be perfect! But ABS did not want to be accused of pirating from GMA-7 and it did not want to start a legal network war. Its legal department scrutinized Angel's contract very well and advised Becky to clear everything with GMA before it could make a move on Angel. It was Becky's call."

In the meantime, as far as the public knew, Becky Aguila was renegotiating Angel's contract with GMA-7. When all was said and done, and Angel ended up negotating with ABS-CBN, Becky stated: "It's time to move on."

ANGEL WITH A DARK SIDE? For her part, Angel went to London for a brief study on clothes design. In her absence, the Pandora's Box opened.

Lolit Solis quoted the rumor that Angel had an "abortion" when she was with Mico Sotto; that she currently has a "rich boyfriend" who financed her London trip; and that she has a sex video somewhere.

Since then, others have been sending in their own reports. A web mole sent an email to PEP claiming that Angel cannot defy the wishes of her manager because the latter holds information that may ruin the career of the woman of the hour. A freelance reporter said to PEP: "Pinagtakpan lang siya ng GMA-7 noon, talagang nag-maldita siya sa Asian...Siguro sa pagod na rin niya."

The rumor has been going both ways. A person from Becky's camp claims that Wilma Galvante, GMA-7's senior vice president for entertainment, is making noise about Angel's transfer because she is allegedly "under fire" from Kapuso top gun Atty. Felipe Gozon who is reportedly upset over the way Wilma handled the contract with Angel. Another insider hinted, "May ABS-CBN star na babalik sa GMA dahil lahat ng possible projects for her, mapupunta kay Angel."

All these rumors have elicited either denial or silence from the people concerned.

Is the issue about money?

"Burned out si Angel at pagod na pagod na," Becky said to explain Angel contemplating the move to ABS-CBN. With her death-defying stunts in tapings that usually end before sunrise, Angel is supposed to want to get what she's worth.

Her perennial screen partner, Richard Gutierrez, is reportedly getting a lot more. Becky, reports say, cried foul. But GMA-7 responded to this claim: "Richard has more shows. He has Nuts, SOP, Lupin..."

Rumor has it that Angel's talent fee in ABS-CBN will be thrice the amount GMA-7 is paying her. If it is, then the move is a good business decision.

Is the issue about integrity?

The Kapuso network is upset that its prized female star made a big career move without proper closure with the people who "gave her the best projects, nurtured her, and helped her become the big star that she is now." All reports are consistent about this: GMA-7 feels betrayed.

We're not privy to what transpired inside their closed-door meetings. We don't know the extent of their negotiations. But Angel's sudden change of heart towards her former Kapuso family is giving the sweet-faced lady a not-so-pretty profile. Unlike her TV series, the twist in this particular episode in Angel's life is not what the majority expected and wanted.

But the noise that cannot be ignored is coming from the viewing public. Staunch supporters of the young star are happy for their idol's decision. Kapuso fans, on the other hand, call Angel "dark angel," "ingrata," "walang utang na loob," and "traydor."

Will the skies be bright and clear for Angel when she starts working again? Heaven knows. And only the mortals will tell.

Check out the part I of this special report: "Angle's flight to stardom" .