Jay-R: A bachelor pad for the Prince of R&B 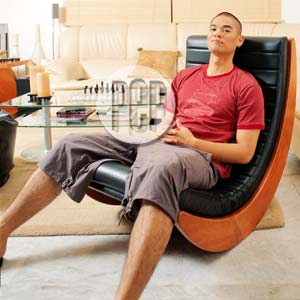 The image of a typical bachelor's pad is one that's cluttered and messy. Jay-R's new place is not typical in that respect. The living room, for instance, has very few accessories. The only big pieces here are an L-shaped, cream-colored sofa and a leather-and-pinewood rocking chair. "I like a lot of space, so that when we throw a party, everyone's gonna fit," says Jay-R. "I don't like it when you come into houses, parang sobrang furniture sa loob."

At 24 (at the time of this YES! June 2005 interview), Jay-R is on top of the world. Since he launched his career in the Philippines two years ago, the local Prince of R&B has been in great demand not only as a concert performer but also as a product endorser (Suncell, Bench), and his first local album, Gameface, with the hit song "Bakit Pa Ba?," was a chartbuster.

Born and raised in the United States, Jay-R (real name: Gaudencio Sillona III) comes from a musically inclined family. "Minsan nga, my mom sings while my dad plays the piano for hours," he says. His three older siblings are also into music. Jay-R himself was already a full-fledged performer before he entered his teen years.

"When I was 10, I was already singing with a group and doing it professionally, like getting paid for shows. At around 13, I fell off for a year. Siyempre, you're going through your teenage years and you don't know what you want. But at 14, I got back in talaga, and I just went for it."

When he got an offer for a network deal from GMA-7 and a recording contract from Universal Records, Jay-R jumped at the chance, even though it meant being separated from his family. "You've got to leave home to grow," he philosophizes, "so that's what I did."

His family, obviously, was ecstatic for their bunso. "They'd just been waiting for something like that. They were real proud. They were happy."

When Jay-R moved from his plush condo unit in Greenhills and bought a house in the quiet community of New Manila in Quezon City, music was also an important consideration: "I got a house where I could build recording studios so I could just work at home. It's more convenient."

The house also provides him with a little privacy. His fans had been able to locate his Greenhills condo and would often knock on his door: "Humihingi ng autograph, mga pictures."

The title that has been bestowed on him by publicists and the press—local Prince of R&B, which would make him the Philippine version of Usher, the multi-awarded American performer—is a big load on his shoulders, according to Jay-R. "It's quite a heavy responsibility. Siyempre sa States, si Usher, we call him the Prince of R&B. I'm nothing compared to him, so parang mahirap din."

On top of everything, JR has also appeared on two television shows, Narito ang Puso Ko and Love to Love. He was also cast as Kris Aquino's husband in 2004 Metro Manila Film Festival entry, Happy Together.

And he hopes to venture into other fields! For this, his partners are friends Jimmy Muna and Christopher Lawrence, who live in this same New Manila home.

"They're really into furniture designing. Maybe we'll go into clothing. There are other things also na I wanna get into. I wanna start my own record label. I wanna buy houses. Ang dami pa!"

Then he adds with a laugh, "And I wanna have a million dollars!"