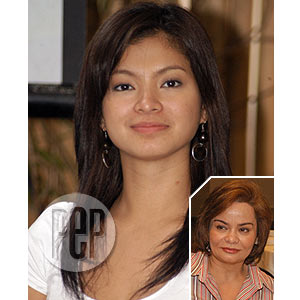 Marimar was a hit telenovela in the 90's, top-billed by Mexican sensation Thalia. Hoping to revive the craze, GMA-7 bought the rights to the series.

On May 10, Becky had a meeting with Wilma Galvante together with Angel's father, Angel Colmenares.

Becky recounted, "Sabi namin sa kanya [Wilma], ‘We would have to beg off sa Marimar kasi Angel, at this point, is really exhausted.' I think naman with the hard work that Angel has been doing, she deserves naman a break.

"And then sabi niya, ‘O sige. Okay na iyan.' Wala kaming diniscuss tungkol sa any contract at all. Daddy was with me that time.

"I did tell her na, ‘Ma'am, di ba expired na ‘yong contract so we had our other options and basta when we come back from our trip sa States, you will be the first one to know.' Iyon ang binitawan kong salita and ‘yon din iyong binitawang salita ni Daddy kay Ma'am Wilma. And then, we left," Becky said.

She added, "A few days later, I received an e-mail from her. She did not mention anything about a network contract. It has something to do with tax, which I'm not too familiar with.

"We just exchanged e-mails. There was nothing or there was no offer at that time. Usapan lang talaga."

REGAL TIES. In addition to her already "full schedule," as Becky said, of Asian Treasures taping and commercial shoots, Angel also committed to doing a movie with Dennis Trillo, under Regal Films. The movie outfit's matriarch, Lily Monteverde, postponed the production of the film to accommodate Angel's schedule.

Becky said that a news item would later come out against Angel because of this.

ANGEL IN DISGUISE? "Prior to our not signing, we already received negative feedbacks about Angel. Even before, I don't know who brought out the issue, but we already heard it from a source. We are already aware of what was happening," revealed Becky.

Becky said that the negative publicity came out during the promo of Angels, a movie that Angel and Becky produced.

She narrated: "We were having so many presscons already just to somehow control the negative publicity that were coming out naman [about] Angel...

"Kasi nga wala na kaming contract at that time. It was their opinion. We took it lightly. What hit us most talaga is nung nag-leak out na. That particular presscon, iyong grand presscon, may grupo na nagsabi sa kanya na ganito ang feedback sa kanya.

"Naayos din naman ni Ma'am Wilma iyon through an article in the Inquirer. In fact, Ma'am Wilma called me in Bangkok during the shoot of Head and Shoulder [sic]. She said, ‘O ayan na ang sinasabi ko sa ‘yo, may nangyayari pa na nag-divulge ka ng plano-plano mo, eventually that will catch up on you and the press will pick up on that. Ang mangyayari diyan magiging negative iyan for Angel pero don't worry sinagot ko na iyan and hopefully it will clear everything about that monster issue.'

Becky revealed that there was already a strain in her relationship with Wilma.

DISTRESS. It had been weeks since Angel's contract expired. Even after several meetings, there was still no formal word from Angel's camp if they were indeed choosing not to renew their contract with GMA-7.

"Ma'am Wilma called up Daddy [Mr. Colmenares]. Tumawag siya kay Daddy and that was the time na she told Daddy nga some things about me. She offered, ‘If you want something like Richard Gutierrez's contract, we can have that naman, so we need to sit down on this and we need to talk to you.' Sabi ni Daddy, ‘I need to discuss this with Angel and of course, Becky,'" narrated Becky.

"Came now the meeting, which was requested by Miss Redgie Magno, she texted me, ‘Miss Annette Gozon would like to talk to you, Angel, and your lawyer.' We said yes.

"That's the Shangri-la [meeting], but we were only expecting Miss Annette [daughter of Atty. Gozon, part-owner of GMA-7], but apparently when we entered into the room, there was Ma'am Wilma, Miss Redgie, Jerry Baca, and Miss Annette.

"Si Miss Annette nakatrabaho lang namin sa films and hindi naman kami nagkaroon ng one-on-one personal relationship with her. So we wanted to have that chance to talk to her and share our sentiments. Go deeper and hindi naman sumbong, kumbaga sabihin sa kanya kung anong nararamdaman namin, kung bakit ganito ang situation ngayon, but we didn't have that opportunity...

"But then sabi nila, ‘What are you going to say? Angel is going to leave for the States tomorrow.' And I told her na, ‘Ganoon pa rin ang stand namin na we will think things over and when we get back, you will be the first one to know.'

"Mayroon na talagang problema na hindi nga namin nasabi doon sa meeting dahil feeling nga namin parang it was supposed to be a meeting with Miss Annette but it turned out to be a group meeting."