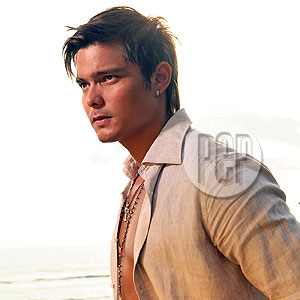 "I don't even know how it did on the box office. I never asked. Kumbaga, hindi talaga 'yon ang concern ko. Basta all I know is that I did a good job. Sa akin, fulfilling 'yon," says Dingdong Dantes about reports that Angels, a movie he co-directed, didn't do well at the box-office.

Three months after Atlantika finished, Dingdong Dantes is back to acting on television. He stars in GMA-7's newest soap to hit the boob tube, Marimar.

Even though he has already proven to be one of Kapuso's stable leading men, Dingdong still had to audition for the part of Sergio.

"Ako, it's important talaga to really dedicate yourself and part of dedicating myself in this project is to really be Sergio. Sabi ko nga, e, from this day on, I would like to think and I would like to feel na ako si Sergio because this will run for I don't know how long. And pag nakikita ako sa labas, iyon ang itatawag nila [sa akin]," said the young actor.

Now that he is busy with this project, he revealed that he would be putting directing on hold.

Angels, a movie produced by Angel Locsin and Becky Aguila, is a three-episode film that Dingdong co-directed. It was his directorial debut as a film director.

He admitted that he doesn't know how much the movie made. He has only heard reports that it didn't do well in terms of ticket sales.

"Much more than the box-office results, nung ginawa ko 'yon [Angels], never kong inisip 'yon. Ang naisip ko talaga is mabibigyan ako ng opportunity. I don't even know how it did at the box office. I never asked. Kumbaga, hindi talaga 'yon ang concern ko. Basta all I know is that I did a good job. Sa akin, fulfilling 'yon," he emphasized.