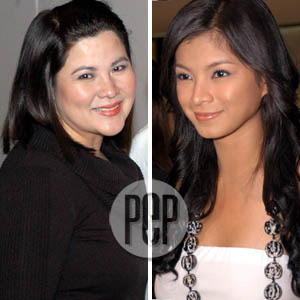 As Angel Locsin's supposed second mother, Ali Sotto, admitted that she was bombarded with interview requests from reporters asking for comments on Angel's controversial departure from her home network.

Ali's last statement shattered a lot of people's perception that she is still in constant communication with Angel Locsin, with whom she shared bereavement back in December 2003 when she lost her son, Miko Sotto in a fatal accident. At the time of his death Miko was Angel's boyfriend. His death brought Ali and Angel closer, prompting the latter to acknowledge at the time that Ali was like a second mother to her.

"Sa dami ng mga tumawag asking for a statement, interviews...and people kasi who remember the time when we were close and the circumstances that brought us together—and there was a time talaga na we clung to each other after Miko died—So siguro, 'yung mga tao, 'yon pa rin 'yung mga nasa isip nila," added Ali, who is currently bound to leave the country anew to accompany her diplomat husband for a duty abroad.

SEVERED TIES. According to Ali, communication between her and Angel just dwindled as they both moved on with their busy lives after Miko's passing.

"...Andun siya kay Mico nung November 1st, October 31st actually with Oyo. She's there but I missed her because kadadating ko lang from States. Christmas, hindi, wala. I didn't get a card, no nothing.

"Nung birthday naman niya, I was calling her up but she didn't pick up, so hindi niya sinagot. So siguro naman nakita niya na may missed call, but I didn't get a return call. Tapos nag-Mother's Day, wala; nag-birthday ako, wala. She just moved on, tried to move on."

Despite Angel's seeming disregard of their ties, Ali made it clear that she never took those incidents against her late son's former girlfriend. Being a product of showbiz herself, she fully understands how the industry works, especially for someone like Angel whose status rose phenomenally in the past four years.

"You know, she's a simple person e. Malambing naman," said Ali in recollection of the Angel she knew, pre-stardom days.

"Parang ano kaya ‘yon, she just had too much too soon?" she then pensively brooded.

OUT OF THE BLUE. Life goes on for everyone involved. In fact, Ali never even monitored Angel's career, nor paid much attention to some petty rumors being spread against her.

That is, up until recently when she got a text message from Angel out of the blue.

Ali begged off to discuss what Angel told her in the text message. She gave in though when probed about the issue that Angel allegedly had her baby with Miko aborted.

"Even before that, she actually got in touch with Oyo Boy [Sotto, Miko's cousin and also Angel's ex-boyfriend] muna and Oyo Boy got in touch with me and we spoke na. You know, I will not even dignify the issue. Miko is the type naman na...I'm sure if and when...if it's true at all, di ba, delayed pa lang siguro, [Mico will say] ‘Ma...' I mean, walang itinatago 'yung bata, e."

Were there any doubts still?

ALI'S ADVISE. Just like everyone else, Ali was also in disbelief when she learned about Angel's transfer to ABS-CBN. No, it's not really the thought of jumping ship that startled her. Rather, it was the way Angel and her camp handled the entire situation that disappointed Ali the most.

"You know, I would have told her na magpaalam ka ng maayos because you cannot refute that, e. That GMA-7 made you the big star that you are. Walang argumento, I mean it's not arguable na may utang na loob siya. Because people say, you know, kahit na ikaw nagtatrabaho ka sa opisina pag inoperan ka ba ng triple ng sinasahod mo ngayon, lahat tayo lilipat sa kabila? Hind, e. It's not the same. It's not a perfect analogy because hindi kayo role model, you are not an influence to other people. Hindi ka tinitingala ng maraming tao na iniidolo ka.

"I would have advised her there's nothing wrong kung gusto mo lumipat, pero give this [GMA-7] network deserves the respect that you owe it. Give these people 'yung consideration, actually love that they have showered you," she uttered.

Despite everything, Ali said that she'll always be there for Angel and would willingly assume the mother role, at least in giving some advice to the beleaguered young actress.

"If I still matter to her, kung me bigat pa 'yung sinasabi ko sa kanya, sana humanap siya ng paraan na mag-sorry sa mga dapat niyang hingan ng sorry. Ako, I feel for the people who worked with her and loved her and took care of her, and kahit 'yung mga fans niya na solid Kapuso who feel betrayed dahil lumipat siya. It’s the way she left na the way nagkaroon ng deception and lies from the way I understand it.

Does she regret all the battles and wars that she faced in defense of Angel?