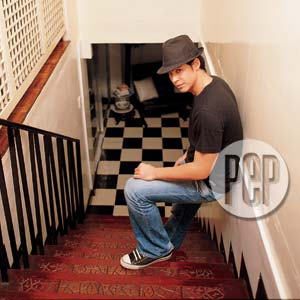 For this shot of the stairway leading to the den, YES! asks Paolo to play it up for the camera. As you can see, he has gamely obliged. He has even suggested using one of his fave hats, confessing that "ang pagka-fashionista ko, ‘dinadaan ko sa hats." (YES! November 2005 issue)

Paolo Paraiso isn't much of a partygoer. The 25-year-old member of the defunct all-male group Barako Boys lives in an exclusive village in Quezon City and prefers hanging out in the neighborhood to partying all night.

At the University of Asia and Pacific, from which he graduated with a bachelor of science degree in information technology, Paolo was into sports a lot—tennis, soccer, table tennis. But his height and good looks led to an unexpected career in modeling.

His mom, Marian, persuaded Paolo to give it a shot. "Feeling ko dati, wala akong kaalam-alam sa fashion. Baduy nga ako noong high school." He eventually learned to be comfortable with his body, enough to make it as a model for Bench. Showbiz beckoned when he accompanied a friend to an audition for ABS-CBN's Star Circle Batch 10. Talent Center head Johnny Manahan spotted Paolo and invited him to audition for Batch 11.


It was in showbiz that he met actress Mylene Dizon, now the mother of his seven-month-old son, Tomas Miguel "Burrito" Paraiso.