Diana Zubiri: The enchantress in her own Encantadia 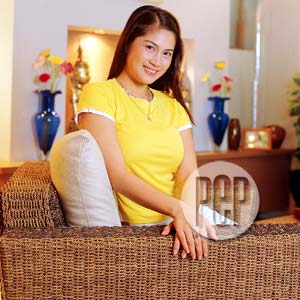 Diana moved into this townhouse on May 10 (2005). "Naka-loan pa po ito sa bangko," she explains. "Pero konti na lang... Kaya sana tuloy-tuloy ang raket." This is her second real-estate investment, the first being the house in Fairview where her mother, her stepfather, and her stepsister now live. She also bought a taxi unit for her stepfather and put up a sari-sari store for her mother. (YES! November 2005 issue)

Diana Zubiri was only eight years old when her father left her and her elder sister in the sole care of her mother. They were then living in Olongapo City, where her mother maintained a sari-sari store to make ends meet. The family later relocated to a rented home in a poorer section of Fairview, Quezon City, where Diana spent the rest of her young life. Soon enough, her mother found them a stepfather. But his presence did not make much of a difference in the family's standard of living.


Even before all these problems cropped up, the young Diana, like many pretty teenage girls, was already nurturing a dream—to make it in show business.


The simple dream later became a need. Somehow, she knew, showbiz could be her ticket to a better life—or, at the very least, her ticket to a college education. That was when she went to ABS-CBN's Talent Center to audition. But fate was unkind to her at that time.

She was 16 when things took a sudden turn. She had decided to go to Japan as an entertainer, despite the hardships she had to go through to train for the job, and despite her fear of traveling alone on her first trip abroad. She had passed the required government tests and was about to get her ARB, or Artist's Record Book.

She went on with it anyway. She signed her Seiko contract in 2001 and was launched in 2002 in the sexy film Itlog, opposite Rodel Velayo. She was only 17.


Three years have passed since then. At this point in her career, Diana is no longer categorized as a sexy star, but is seen as a TV-movie celebrity capable of taking on a variety of roles. All this, thanks to a change in manager (she's now being handled by movie writer Jojo Gabinete) and a series of image-
changing projects—two films by the award-winning director Jeffrey Jeturian (Liberated 1 and 2); good exposure in Eat... Bulaga!; inclusion in the consistently high-rating TV fantasy series Encantadia, as a fairy princess named Danaya; and a regular stint in the equally high-rating gag show Bubble Gang.

She is, needless to say, the family breadwinner now. But the family she's breadwinning for is only the one on her mother's side. And we can't blame her. Of her father, she says, pointedly: "Nasaan ba siya noong lumalaki ako?"
The father, however, is now staking a claim on Diana, and disturbing her peace of mind in the process.

One time, he showed up unannounced in a studio where Diana was working. Another time, in a more brazen move, he made an appearance in a TV talk show. Each time, he asked for one thing—financial aid.

In the beginning, Diana gave in to his every demand. But these days, she won't hear any of it. She has left the matter in the hands of her Tito Jojo Gabinete and her mother.

Whatever this nice and pretty girl enjoys now, she truly deserves.