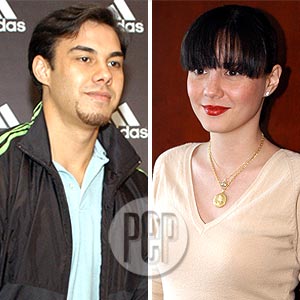 "Siguro, maybe at the end of the year that's when we're going to start planning already," said Chesca about their wedding plans.

She added, "But then, I haven't really decided on anything because I want to plan everything at the end of the year. By then, everything's already fixed because this Sunday, Doug will have himself drafted [in the PBA] and from there we can already schedule things properly."

Though there aren't any concrete plans yet, Chesca said they will be saying "I do's" in Christian rites.

"My dad wanted it in Baguio, but pag-iisipan muna namin ‘yon. Medyo mahal, e," she said yesterday, August 15, at the press con of her lifestyle show Us Girls held at 9501 restaurant, ABS-CBN.

Chesca wants a masquerade as theme for the wedding, but Doug disagrees.

So far, the entourage includes Chesca's co-hosts in Us Girls—Angel Aquino and Iya Villania—of course, her brother Patrick Garcia.

"I'm sure Patrick's one of the groom's men pero best man siguro will have to be [Doug's] best friend," said Chesca.

Patrick's girlfriend, Jennilyn Mercado, will also be a part of the entourage.

HITCHED. Although Chesca and Doug are sure to get hitched, they won't be lugging around kids soon.

Chesca also disclosed that she is not quitting showbiz even when she's Mrs. Doug Kramer.

"In fact, he [Doug] said I can continue doing what I wanna do so that I don't get bored. And he also said that he's gonna support me. he's not the typical guy na you can't work, you can't do this. Parang it makes him happy to see me improving on my craft or doing something that he can be proud of," she ended.
Read Next
Read More Stories About
Chesca Garcia, Doug Kramer, Patrick Garcia
Post a Comment
Featured
Latest Stories
Trending in Summit Media Network