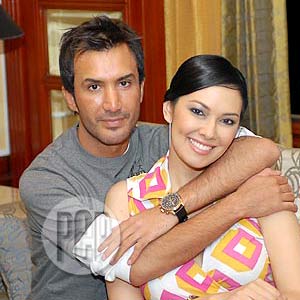 Dropping all his concerns and reservations, Yilmaz Bektas revealed that he wants to personally break down the barrier between him and ex-wife Ruffa Gutierrez's parents to settle their differences.

"I'm planning to speak with them but they have to be correct and perfect time," Yilmaz said in taped interview with Startalk aired yesterday, August 19.

"I'm not scared... If you ask me to I can answer that the funny way but I will have to answer serious way, of course I'm nervous and then also I am shy. You know that whatever we did is not nice, both sides. Ruffa and with my side. Something not nice and then our parents getting mostly damage like my mom and my father too," acknowledged the controversial Turkish businessman.

Visiting the country to talk with Ruffa personally, according to Yilmaz, was the first step, but it doesn't guarantee that everything would finally turn out fine.

"This time I don't know. Maybe the minute, maybe the ten years but until ten years I will gonna try... I want all family back like Gutierrez family and Bektas family have to be together," he pointed out, keeping his fingers crossed.

MIDDLE GROUND. Ruffa has been very vocal in saying that returning to settle in Istanbul anew is out of the question. When reminded of this, Yilmaz quickly took all the blame upon himself and defended that his home country, as well as its people, has absolutely nothing to do with Ruffa's decision.

"I'm sure if you'll gonna ask her the same question, she will not gonna answer the same way because of my country. I'm not trying to be nationalist but Istanbul is one of the most beautiful city. Because there's one side of Asia and there's side of Europe.

"If you're next to the person you love, even hell will gonna be look like the heaven. That's why she has not problem to Istanbul. She have a problem with me, she have to not try to change the country. She try to change whatever doesn't like I'm carrying. Can be my anger, can be my aggressive side..."

Wooing someone back of course has its inevitable consequences and Yilmaz knows it so the possibility of flying back and forth to Manila, no matter how tiring it would be, is one prospect that he's considering.

"Actually, I have a plan to stay here, not all year because of to I respect to her contract but also I have a business too, and then I'm gonna do my best. But gonna be tiring for me like if I have a meeting I'm gonna fly to here I'm gonna stay with them again. I think I have to be a pilot," he quipped.

STAYING IN MANILA. Even before the separation, the couple was already considering buying a property here in Manila to make it easy for them during occasional visits. That plan took a backseat when Ruffa and Yilmaz decided to call it quits a few months back. But since they're now in the process of fixing the relationship, that plan once again becomes feasible for both parties.

"Yes I have to buy not because of to Ruffa. We decided already we're gonna buy a house in Manila because she's from Philippines and I love Philippines, my kids love Philippines. And I think we should have a place like I don't have to be in a hotel and something like this."

LORIN. On the lighter side, Yilmaz eagerly shared that he and Ruffa decided to settle for a piano as a birthday present to daughter Lorin. Yilmaz originally thought of purchasing a thoroughbred horse as a gift, much of course to Ruffa's objection.

"Ruffa doesn't want to buy one racehorse, like British racehorse but Ruffa say we have to buy a farm so we decided to buy piano. It's gonna be more easy and more clean," he laughed.

Yilmaz, who because of the much publicized separation became a celebrity overnight, pensively defended his sincerity in pursuing his wife back.

"I'm carrying is name of love and if look like fake, it's people problem. But I'm not speaking to fake and I don't need to rating because I don't have a show. I'm not signing contract with anywhere and I'm not planning to sign," concluded Yilmaz.