Gretchen Barretto on sisters: "We will always have each other." 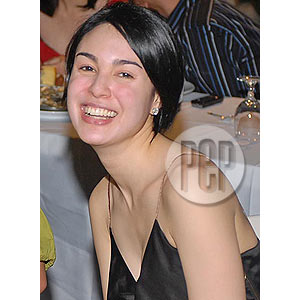 Gretchen Barretto considers the "kisscandal" with John Estrada as the most difficult issue she faced. It was her partner of twelve years, Tonyboy Cojuangco, who became her anchor. She said, "Nung nangyari yung kontrobersiya, wala pa siyang boses nun kaya niyakap niya ako at pinacify niya ako. I guess he's good at that, comforting me when I'm in trouble."

Gretchen Barretto is now back and she answers all the controversial events that happened to her during the past months. The Buzz's Boy Abunda welcomes La Greta on a one-on-one interview concerning her improved relations with her sisters, Tony Boy's health condition, and the enigma behind the "kisscandal" with John Estrada.

Then she added in jest, "It doesn't matter, right? May Barretto, may Santiago!"

Marjorie's sudden text message in the middle of Gretchen's ordeal brought tears to her eyes. She said the text message said something like: "Gretch, This is Marj. I'm just here and I know you're going through a lot. I love you."

At this point, Gretchen was already fighting her tears when she added: "We [both] just cried. I can't even tell how long and I called just to say ‘I love you.'"

Now, it's smooth sailing for the three sisters, a completely different path compared to the one they chose before when there was totally no communication between them.

She continued, "Ayoko ulitin ‘yon, so alam ko kung ano 'yung tama, kung hanggang saan just to preserve that relationship. It's the best thing. When she [Marjorie] calls me just to say she loves me, and I do the same, we don't talk for hours. When we have a problem we know we have each other. We know we are strong together. We will always have each other."

Once again, Gretchen was teary-eyed when she explained that she realized, when "one is really in trouble, kahit masama ang loob mo sa tao, sa kapatid mo, it's automatic... it's love, it's blood."

About John, has Gretchen had the opportunity to face and talk to him?

"Hinde," Gretchen said, "hindi ko pa kaya. I'm old enough, I'm an adult. I should be responsible for my own actions."

According to Gretchen, only time can tell when she can bundle up the courage to face the issue and face John.

"Hinde ko pa kaya emotionally. One of these days I would really have to sit down and really see kung kamusta na siya, kung ano na nangyari. I don't know kung tapos. I guess we're allowed to put things aside even when it comes to our emotions. I have put that aside for my own sanity."

For Gretchen, the issue with John was the most difficult for her to handle because many people got involved and were hurt by it. She added that no matter how bad you've acted as long as you're honest and be able to face the consequences, you'll be fine.

Is this one of the traits that Tony Boy appreciates in her—her being true and honest about everything?

At the time Gretchen and her loved ones were in the U.S., they became more bonded in the middle of the Gretchen's predicament.

"Si Tony kasi madasalin and lagi niyang sinasabi na kailangan maging matatag daw ako. Nung nangyari 'yung kontrobersiya, wala pa siyang boses no'n kaya niyakap niya ako at pinacify niya ako. I guess he's good at that, comforting me when I'm in trouble. Para kay Tony, parati siyang may rason para sa mali ko. He would always try to justify what I do and why I do it, and l love him for that."