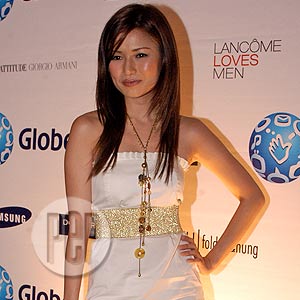 Say Alonzo loves dressing up, but she's also a strong advocate of any issue on environmental protection.

"When I was in the States I was in the science club and I was really into marine biology. I don't like getting dark but I love going to the beach," she told Philippine Entertainment Portal (PEP) during a chat last Thursday evening, August 16, at the Rockwell Tent in a special event held by a men's fashion magazine, which also celebrates the preservation and maintenance of the La Mesa Dam Eco Park.

"Natalo ako sa Game K N B," Say smiled, but if she had won she'd have willingly donated half of the money to the La Mesa Dam.


WICKED ON SCREEN. Aside from doing her share in the environment, Say is also very proud of her new role as a serious contravida in ABS-CBN's, Margarita.

Playing villain was not on her mind at first. But, "everyone wants to be a bida," she observed.

She cited the characters of Amor Powers and Madame Claudia as the kind of roles she wants to follow someday.

And of course, who could overlook kontrabida icon Cherie Gil?

Say appears in Regal Entertainment's upcoming movie, My Kuya's Wedding and in a new show on Studio 23 entitled, Rush TV.


LOVE LIFE. "Oh my God...! how is my love life?" Say reacted spiritedly when we changed the topic.

"Well, blooming but I don't have anyone in particular pa. I'm enjoying my single life but there are some people..." she paused with a grin.

Is singer Erik Santos, who was linked to her at the height of his split-up with comedienne Rufa Mae Quinto, completely out of the picture?

"Erik Santos is a good friend. I think Erik would be the perfect boyfriend," noted Say much of course to our interest.

So, what if Erik suddenly courts her?

"If Erik courts me? He should court me first and we'll see. Kasi ‘pag sinagot ko ‘yan ngayon ‘di parang sinasagot ko na ‘din s'ya. But we spend time naman in a group, in our bible study," answered Say good-naturedly.