YES! September 2007 issue: Ogie and Regine kick back and relax in Hollywood 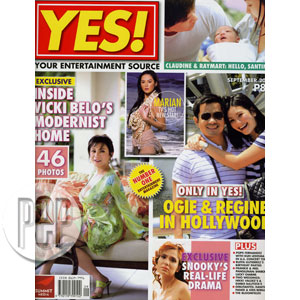 "It was the first time we traveled together after admitting our relationship. So it was more pleasant. You have the not-being-bothered factor. Everything was more natural," reveals Ogie Alcasid about his trip to the U.S. with girlfriend Regine Velasquez.

Regine Velasquez and Ogie Alcasid share their travel photos in YES! magazine's September 2007 issue. The Songbird and the Songwriter took a day off from their busy Love to Laugh tour schedule to go to the Universal Studios, a theme park in Los Angeles, California.

"It was the first time we traveled together after admitting our relationship. So it was more pleasant. You have the not-being-bothered factor. Everything was more natural," revealed Ogie.

The couple, together with Ai-Ai delas Alas, went to the U.S. and Canada for their eight-city tour in New York, Chicago, Los Angeles, San Francisco, Calgary, Vancouver, Edmonton, and Winnipeg last June.

Though traveling is an essential part of their work as artists, the two are not complaining. Both like traveling in general.

"We're always on the Net looking for nice places to go to. We planned to go to the Maldives, but the tsunami happened. Hindi na natuloy," commented Ogie.

Before Vicki became the famous dermatologist to the stars, Vicki revealed that she, like her future clients, had problems with weight and acne.

"I was mataba kasi, so I had pimples. I had plenty of pimples. So, I would sit in the clinic of the derma, and I'd say, ‘Hmm, mukhang maganda ito, ang daming nakaupo...' So I said I'd be a derma. I trained with the derma at 13," she disclosed.

The rest is history.

Get to know more about Dr. Belo, Ogie, and Regine in the September issue of YES! magazine. Now available!