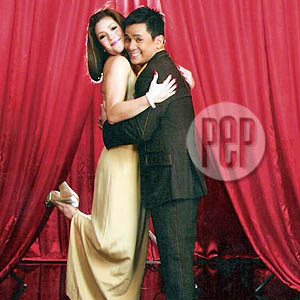 For Asia's Songbird Regine Velasquez, every song that her lover Ogie Alcasid sings for her now means far more than ever before.

During Ogie's birthday concert at the Music Museum, last night (August 24), Regine wept while Ogie serenaded her with familiar yet ever-pognant melodies.

As expected, the question of wedding bells came up again.

"We need to settle a lot of things first," expressed Regine for the nth time.

Both parents of Ogie and Regine were also on hand to celebrate his birthday.

The elder Alcasid, who courageously did a duet with his son, has nothing but good words for his future daughter-in-law.

"She's a very good daughter. She has provided very well for her parents," he said approvingly.

Ogie's birthday concert will have its second run tonight at the Music Museum.