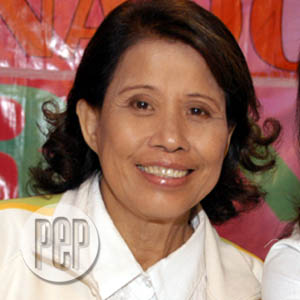 In a one-on-one interview with Startalk's Butch Francisco, Mother Lily Monteverde revealed that she had a crush on Gabby Concepcion and Alfie Anido. If she were a lesbian, she would have a liking for Maricel Soriano.

At the height of Regal Films' fame, it had produced over 52 movies up to the year 1995 when 90 percent of its films made the box-office. Things change, but one can be sure that Regal paved the way for actors and actresses and introduced new faces for this generation.

All of these were made possible with the help of birthday celebrant Mother Lily Monteverde, who forged the foundation of Regal and turned it into something more than a showbiz establishment: a close-knitted family.

Startalk's Butch Francisco indulged the viewers with his interview about Mother Lily's favorites, her thoughts in the business, and her motherly advice for Angel Locsin.

Of all the Regal babies, who was Mother Lily's favorite?

"Well, I think all of them," Mother Lily said, laughing, "because of the early '80s; there was Gabby Concepcion, Dina Bonnevie, Maricel [Soriano], Snooky. When I was new, ang ganda ng bonding namin. They would go to my house, play with my kids, yung mga ganun. It's like a family."

Of the sweetest of all her alagas, Mother Lily gave a surprising answer: "I think it's Maricel. She is very frank but she's very sweet and very sincere with the way she talks."

"I would have to say Snooky," Mother Lily said.

When asked who was the most pasaway, Mother Lily laughed and gave the same answer. Does it have anything to with Snooky being home-based and all?

"Well, it's a matter where I would sometimes have to go to their house to pick her up," she said.

Then on a more serious tone, Mother Lily shared how hurt she was when Snooky crossed the bridge and made a film with Viva Films, Regal's fiercest rival at that time. It pained her and really made her cry but she said that she still loves Snooky very much.

Who are her crushes in showbiz?

"Gabby Concepcion and also Alfie Anido," Mother said without hesitation. Alfie was one of the most popular and most handsome young actors in the early '80s. He committed suicide at the age of 22, although there were also rumors that he was murdered.

If she were a lesbian, who would Mother Lily admire?

How much is Lily Monteverde's net worth now?


ANGEL LOCSIN. The topic then shifted to a more serious note when Mother Lily talked about how frustrated she is at Angel Locsin. The Regal matriarch said that Angel didn't honor her contract with Regal in favor of the two-year movie contract she signed with Star Cinema. According to Mother Lily, Angel's contract was exclusive and the young actress still has a three-picture contract with Regal.

"She has to honor her contract," Mother Lily began, "I told them not to sign, pero sinign pa kaya parang wala naman silang respeto sa akin. In fact, before Angel made her movie [Angels], her manager Becky [Aguila] went to see me to ask permission from me just to allow her [Angel] to do her own film. In fact, she agreed that they still had a three-picture contract with me. All of the sudden, nagbago. "

How did it change? What did Mother Lily mean by "nagbago"?

Mother Lily pointed out that what she really wanted was respect. Respect in that Angel should settle things first before signing up with another contract since "we are like a family."

But as the interview progressed, Mother Lily admitted that she still cares for Angel and that she loves her.

"Siyempre," she said. "I also still feel bad sa itong nangyayari; sana maayos na. Those were the days na I remember na kasama ko si Angel, parang anak ko na. Pag meron siyang problema, she consulted me. We became close talaga. It hurts me because I don't see her anymore and she doesn't even want to talk to me. Sometimes I call her, pero hindi naman niya sinasagot ang call; nasasaktan ako. But still, I can always forgive her.

"For Angel, I wish her good luck."