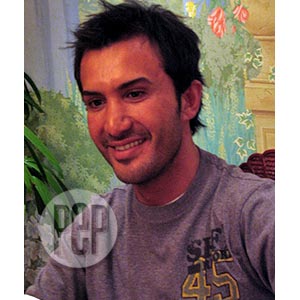 After spending eleven days in the country, Yilmaz Bektas finally bid goodbye to his family and returned to his home country. He had postponed his trip twice since he could not bear to part with his wife, Ruffa Gutierrez, and their two daughters. Yilmaz and Ruffa are now on the path of reconciliation after talking about their quarrels and differences face to face.

ABS-CBN showbiz talk show The Buzz showed footage of the Turkish businessman before he boarded his flight on Tuesday night. "I have to go now. Of course, I'm gonna come back soon," he promised. "I look right now not I'm sad or upset. I'm leaving them here but I'm gonna come back again."

When asked to describe his relationship now with the TV host-actress, Yilmaz confidently said, "It's perfect. We will gonna continue again our marriage after we got the blessing from her family and from my family and we're gonna be fine. It's fine now."

"She's keeping her love and I also have the same feeling," he declared.

A few days before he left Manila, Yilmaz visited his wife in Quezon City during one of her tapings for Kokey. The video footage showed Ruffa with a bandage in her forehead, as part of the actress' props in her scene in Kokey. Yilmaz asked his wife, "Who break your head? Show me, show me. Last night, we had a fight."

When her eldest daughter Lorin pressed Ruffa for an explanation for the bandage, the TV host-actress joked, "Kokey hit my head."

It was revealed that Yilmaz is considering purchasing a condo unit or a house in Manila. "I want a condo in Manila. We're looking [for a] house for us and we're gonna buy a house," Yilmaz said.

"Wow, it's so touching. I think, you know, 'yon 'yung price ko after sinaktan niya 'yung ulo ko," she laughed. Ruffa then turned to Yilmaz and translated, "I said you're gonna give me a house, it's my price because you hit my head and I had to go to the hospital."

The couple also disclosed their plans to get married again. According to Ruffa, she is just waiting for Yilmaz's proposal and the approval of her parents, Annabelle Rama and Eddie Gutierrez. "We wanna make one a wedding. I wanna see again when she's wearing the gown."

Yilmaz countered this by asking her, "You want a second bandage?"

Despite the distance and the amount of time consumed by traveling back and forth to Manila, Yilmaz will not think twice of coming back when his children miss his presence. "If my children will say ‘Bubba, we wanna see you again' then I will come. If I can't find a flight then I will swim."