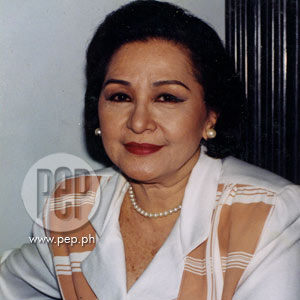 Nida Blanca's professionalism and dedication to her craft made her one of the most beloved and well-respected actresses in Philippine cinema. Her murder in 2001 was an unjust ending to a stellar career and inspiring life.

There's something tragically sad and romantic when a popular personality leaves this world suddenly.


Such deaths in showbiz are especially tragic because celebrities have still so much to give and to achieve. However, the tragedy is ours, really, whether they were snatched away by violence or by illness to which they fell victim. We will never again see them alive, except in the images they left behind. That's when nostalgia sets in and we can only view them romantically as the stuff of legend.


NIDA BLANCA (1936-2001). The picture of veteran actress Nida Blanca—slumped inside her car and bathed in her own blood—came as a total shock to everyone in the early morning of November 7, 2001.

The police reported that Dorothy Acueza Jones was beaten and stabbed 13 times in the back seat of her Nissan Sentra in the parking basement of the Atlanta Center in Greenhills, San Juan, Metro Manila. At that time, Nida was a board member of the Movies and Television Regulatory Classification Board (MTRCB) under the stewardship of Armida Siguion-Reyna.

Continue reading below ↓
Twelve days after the bloody murder, self-confessed killer Philip Medel surrendered to the police and confessed that Nida's American husband, Rod Strunk, masterminded the crime and hired him to carry out the act. Medel eventually withdrew his initial testimony and accused the police of torturing him to own up to the crime.

Authorities insisted that Strunk remained the principal suspect, based on strong circumstantial evidence. Unfortunately, indicting Strunk took so long that by the time formal charges were filed in 2003, Strunk had already left the country. The government's effort to extradite Strunk from the U.S. failed miserably.

On July 11 this year reports reached Manila that Strunk had allegedly committed suicide by jumping from the balcony of the Tracy Inn in Tracy, California.

Some close friends of Nida cited the irony surrounding Strunk's death. They noted that Strunk's body was found in the parking lot of the motel establishment where he was staying at the time of his death. Nida, too, died in a parking area.

Poe's death came as a shock mainly because the legendary movie star didn't show any sign of ill health prior to his demise. He even campaigned vigorously during the presidential elections, which he lost allegedly by fraudulent means, that same year.

On December 10, FPJ complained of dizziness during an early Christmas party with close friends and employees. He was immediately rushed to the St. Luke's hospital where he slipped into a coma while being treated for a brain clot caused by a stroke. He succumbed a few days later at exactly 12:01 a.m. The official cause of death was thrombosis with multiple organ failure. FPJ was 65 years old.

As soon as his death broke out in the news, friends, supporters and fellow celebrities immediately rushed to the hospital crying and in total disbelief.

Expressing gratitude to all of her late husband's grieving supporters, Susan Roces issued a statement saying: "We are indebted to your being with him in the face of the challenges."

According to a report submitted by the FPJ Coordinating Council, at least 3,000,000 people attended his nine-day wake, with people coming all the way from far-flung places, patiently waiting for hours to say their final goodbye to Da King.

The King of Philippine Movies was buried beside the grave of his father, Fernando Poe Sr., and his mother, Elizabeth Kelley, at the North Cemetery in Manila.

ALFIE ANIDO (1959-1981). Young, mestizo, and drop-dead handsome, Alfie Anido embodied the matinee idol that the local movie industry was looking for during the ‘80s.

Alfie and Dina were romantically linked after the pair starred in the movie, Temptation Island. During his stint as a full-time actor, Anido was juggling his time between acting and completing his management course at the Ateneo de Manila University.

Unfortunately, the young actor would not be able to realize his full potential as he died tragically at age 22. The cause of his death, as reported in the media, was suicide through a self-inflicted gunshot wound.

The underground press questioned the suicide version. Soon rumors abounded that Anido was murdered on the orders of someone who belonged to a prominent family closely associated with then president Ferdinand Marcos. The suicide angle was allegedly used to protect the names of those who were involved in the crime.

Alfie Anido's death remains a mystery, clouded with doubts and even morphed into an urban legend. But despite all the speculations and never-ending debates, no evidence has been brought forward to challenge the suicide story.

RICO YAN (1975-2002). At 27, handsome, bedimpled matinee idol Rico Yan seemed to have it all. A blossoming showbiz career, a good background behind his name, a college degree from a prestigious school, plus sharp business acumen to complete the package.

Unfortunately, all these good points were rendered useless on March 29, 2002 for Ricardo Carlos Castro Yan. He succumbed while asleep to acute hemorrhagic pancreatitis a day after shooting a television commercial at the Dos Palmas Resort in Palawan.

Rico's death was not spared from intrigue. Reeling from a broken heart after a separation with actress and then girlfriend, Claudine Barretto, the young actor was said to be extemely depressed at the time of his passing.

Malicious rumors started cropping up and some quarters doubted reports on the cause of Rico's death. As expected, and owing to Rico's emotional state during his stay in Palawan, talks of suicide came into play with allegations that the actor overdosed on drugs to ease his pain.

In the wake of his death came the disclosure and eventual confirmation that his relationship with Claudine Barretto had indeed ended, triggering some of Yan's fans to vent their anger on an ex-girlfriend who was as "shell-shocked" as everyone else.

Despite the myriad questions and suspicions clouding Rico's last days, one story stood out and was even verified by some witnesses. And that was a young man singing his heart out to the tune of "Got to Believe" and "Falling For You"—two songs featured in Rico's last movie titled Got 2 Believe, with no less than with Claudine Barretto as his reel love interest.

JULIE VEGA (1968-1985). Julia Pearl Postigo, better known as Julie Vega, began her career at the tender age of three as a television commercial model. Her first major lead film that endeared her to the masses was the 1978 hit Mga Mata ni Angelita.

Her star shone even brighter when she was tapped to play the lead role in GMA-7's soap opera, Anna Liza. Pulling off the usual underdog character, Julie earned the sympathy of the viewing public and in the process catapulted her as local showbiz's newest darling.

Sadly, Julie's health deteriorated and her death caused by pneumonia at the age of 16 triggered a giant wave of grief that was felt around the country. The throngs of people during her funeral procession proved that despite her short stay in the entertainment industry, she still had managed to touch the lives of her countrymen.


According to the reports filed by the police, 21-year-old Miko was passing time with his cousin, Oyo Boy Sotto along with two other friends when he fell from the ninth floor of the San Francisco Garden Plaza Condominium in Mandaluyong City. The actor owned a unit in the said establishment.


Reports indicated that Miko was seated at the railings of the balcony when his foot got caught in a plant box, consequently making him lose his balance.


The doctor's who attended to the ill-fated young actor issued a statement later on saying that Miko died from multiple skull fracture.

LINO BROCKA (1939-1991). The death of renowned movie director Lino Brocka in a freak vehicular accident on May 21, 1991 in Quezon City dealt local showbiz a tremendous blow that continues to be felt even today.

Under Brocka's tutelage, the movie industry made much progress out of the man's genius and dedication to the art of moviemaking. Brocka's numerous critically acclaimed films are considered masterpieces that defied that thin line between commercial and artistic value. His filmography continues to inspire generations of artists.

Lino Brocka directed over forty films, the majority dealing with poverty and oppression—topics that reflected the nation's bleak conditions.

At the time of his passing, the respected director was filming Sa Kabila ng Lahat. He left behind his mother Pilar and brother Danilo.


"I always remember him as someone who is very forthright, very visceral, very sensitive, very sincere, but didn't want to be controlled by anything," fellow director and good friend Behn Cervantes said fondly.


"He had dreams. And these dreams were not basically materialistic. His main concern has always been the people," Cervantes added.


Another good friend, scriptwriter Ricardo Lee described the late director as a man consumed wholly by his art and who would do anything to preserve it. "Lino is a very passionate person. Siya ang taong pambihira mong makita na walang nararamdaman o walang opinyon o walang passion about something," observed Ricky Lee.


Six years after his untimely demise, Lino Brocka was bestowed the honor National Artist for Film in a posthumous ceremony.