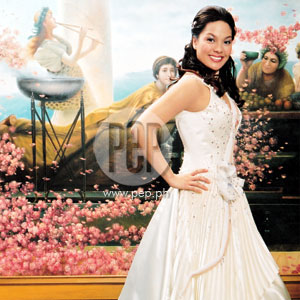 Her debut, says KC, was gift enough from Mom Sharon. But the excited mother, not content with footing the bill, also gifted KC with heart-shaped earrings and a ring studded with pink diamonds from Kristine Jewelry. Senator Francis "Kiko" Pangilinan, her stepdad, gave her an Omega chain made of South Sea pearls. And Gabby Concepcion, her father, sent her, through his sister Sandy, a white-gold bracelet with a heart-shaped charm—Model 925 from Tiffa

For her April 8 debut, KC was very hands-on. From the concept to the food to the gown, down to the giveaways, no decisions were made without her final approval.

From the onset, KC wanted a nontraditional debut—no cotillion, no 18 roses, no escort. Her reason for not having an escort: "This is what I say, ‘Mom, I want to celebrate being dependent on no one."

The general concept of the debut had to do with nature and fairy tales. Robert Blancaflor of 1816 Flowers and Event Styling, a favorite of celebrities (his clientele has included Aga and Charlene Muhlach, Ruffa and Yilmaz Bektas, Vicky and King Reyno, and Kristine Hermosa), met with KC at least three times. Sharon was present during those meetings, but let her child take charge.

Robert recalls that KC showed him a picture on her personal computer. She wanted the look of an "English forest in the old days," says Robert.

KC even wanted to have images of mermaids and fairies: "Since I was young, I have loved mermaids. I've always loved mermaids because of the ocean. I'm like a beach baby. Fairies, because they're women. There's nothing about their bodies that change except that they grow wings, and wings for me stand for independence. You're free. Kind of. It's one of those childhood things that you keep in your heart and never let go of, because they're cute and mystical."

With his 20-person team, Robert went on to transform the NBC Tent into a forest. Work was finished in two days. A mock-up was shown on the press night, but the "full effect" would be seen the following day.

KC loves red, so flowers were in monochromatic red, strewn all over landscaped areas of the tent. Robert ordered big Ecuador roses, a combination of small roses, and Dutch tulips for contrast.

In the left corner of the foyer, near the entrance of the NBC Tent, a kid station was set up. It had small tables and chairs for Frankie and her cousins to play around in while the adult party was going on.

Inside the Tent, a set designer built 12- to 24-feet-high wire-and-cardboard trees with no leaves. These make-believe trees stood tall amid metal chairs, stylized tree trunks, and low tables.

A mini-stage for the band was set up in one corner of the Tent. In the opposite corner were a fountain and a bridge. In the center was a wishing pond, spruced up with rose petals, dried leaves, and twigs. To create the effect of a forest, the whole inside of the Tent was draped with a large piece of white cloth, lit up to create the effect of clouds, tree branches, and leaves. Thick ecru-colored candles covered by leaves and twigs were placed all over. Lighting was primarily dim, the way KC wanted it. To complete the ambiance, sounds of twitting birds were played throughout the evening.

The Most Sought-After Invite

The beige invitation of hand-made paper was consistent with KC's back-to-nature concept. Written on the opening flap of the envelope was a quote from Bilbo Baggins of J.R.R. Tolkien's The Lord of the Rings: "It's a dangerous business, going out your door... You step onto the road and if you don't keep your feet there's no knowing where you might be swept off to." Below the quote was KC's trademark butterfly signature.

Inside the envelope were three cards. The main invitation, a folded card, noted that "Kristina Concepcion becomes 18..."

A second card had a touching note from KC: "I have a passion for the environment and kids; in lieu of gifts please donate to the following..." followed by the names of four charitable institutions, chosen for KC by Rita Neri's group, namely, Happy Earth, Pangarap Shelter, House of Refuge Foundation, Inc., and Humpback Whale Research and Conservation Project.

On the third card was a paragraph that said: "This event will be covered by ABS-CBN Channel 2 for airing at an undisclosed date. In coming to the affair, you agree to be included in the video coverage and airing. We apologize for any inconvenience this may cause."

The number of guests that night swelled to 600, most of them relatives or close family friends of the host family.

"I'm blessed," says KC of her debut. "Grabe to have a party like this. I'm glad that I'm not feeling guilty because I am splurging on nothing. Parang it's all meaningful to me. Like Tita Jess [Sincioco]. She's been there since my childhood days. Everybody behind the scenes has seen me grow up. It's like everyone's art project."

So, on her 18th birthday, what more could KC wish for?

"Obviously, everyone wants a good life," she beams. "At the end of the day, you just want to be peaceful and quiet. I wish my party becomes more than just a good party. I don't know how or what. When they leave the party, the guests will be touched in some way that will change their lives, because I'm sure it will change mine. That will be a turning point. It's my birthday. I'm turning 18. I hope it will leave the guests with more than just a good night. It's like a celebration of life. It's a way for them to stop and just think about what they have in life and the people they have in life, to just appreciate all of that."