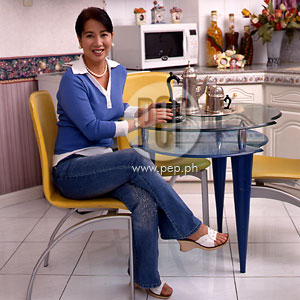 Glenda likes entertaining her friends at home. She is, in her word, a "maalagan tao." And indeed, she goes to the extra mile to make these occasions nice. She stocks up on her friends' favorite wine, cheese, coffee, tea, pasta and canned sauces of every imaginable kind. "Gusto ko kasi pag may ni-request sila, nabibigay ko," says the spoiler. "Pag sinabing, wine tayo, ipeprepare kita nang iba't-ibang klase ng wine with matching chee

Glenda has a busy kitchen. Those many cook books on the shelf? They're not there for display." Ang specialty ko, tuna pasta," she beams. Glenda says her upbringing is to blame—or praise. They where three girls and one boy in the family, and all the girls practically grew up in the kitchen. Eventually, the girls' business ventures had something to do with food. "Dati nagkaroon kami ng bakeshop," Glenda recalls. "Nagkaroon din kami ng catering, ‘tapos ‘yong pinaka-last, nagtayo kami ng food cart sa mga malls. Meron kami sa SM, sa Ever. We were selling different kinds of pasta and pita sandwiches. Pero since masama ang negosyo ngayon, sinarado na namin siya."

Glenda Garcia, younger sister to actress Melissa Mendez, was taking up dentistry at Centro Escolar University when the showbiz bug bit her. Movie writer Eugene Asis, who saw her tagging along with her Ate Melissa, convinced her to give acting a try. She was only 19 then. She took her chances without dropping out of college.

"I shifted nga lang to mass communication," says the 37 year old. "Because I was already in show business, so feeling ko, mas related na field. I majored in broadcasting. I finished it naman, thank God."

It was the late Ike Lozada, former TV host, who gave her first TV exposure. Not long after, Ike recommended her to talent manager Boy C. de Guia, who agreed to give her a spot in Star Brighters, a TV show he was hosting. In the show was a group of young talents which included: Ilonah Jean, who used to play supporting roles; Cookoo Gonzales, who remains active in lounge circuit; and Cathy Mora, a sex goddess of that era.

More adept at drama, Glenda was given the Most Promising Female TV Personality award at the 1989 Star Awards.

The early ‘90s were a good time for drama. Glenda made a killing by accepting all invitations to guest as such high-rating shows as Ipaglalaban Mo, Lovingly Yours, Helen, Mother Studio, Regal Shockers, and Coney Reyes On Camera.

But it was 1993, when she landed the role of evil Leona in the daily soap opera Valiente, that she became a household name.

By this time, even TV veterans began to take notice of Glenda. To this day, she cherishes the words of two people: veteran writer Gina Marissa-Tagasa, then the regular writer for Coney Reyes On Camera, who told her that she was a favorite guest on the show; and veteran actress Gina Alajar, who told her she was a good at villain roles. "Nakikita daw niya sa akin noon si Carol Varga," she smiles. "Number one kontrabida daw noong araw ‘yon. Isa daw sa pinakamagaling. S'yempre nakakataba ng puso."

Gina words were prophetic. Glenda would receive best-actress nominations two years in a row from the Star Awards for Leona role. "Medyo napansin naman," she says, relishing the thought.

In her 14 years in show business, how ever, Glenda did just 20 movies.

But she doesn't have dreams.

Another dream is to be given the chance to work with the best stars. "I want to work with sila Christopher de Leon," she enumerates. "With si Vilma Santos, si Nora Aunor and Sharon Cuneta. ‘Buti kahit paano I've worked with Maricel Soriano na before sa TV and si Aga (Muhlach) din. ‘Yong mga ganoon ba."

But even without those others, Glenda is fine. After all, how many can say they're great at a job they love?
Read Next
Read More Stories About
Glenda Garcia, Melissa Mendez, homes
Post a Comment
Featured
Latest Stories
Trending in Summit Media Network