Celebrities dine with their pets and PAWS 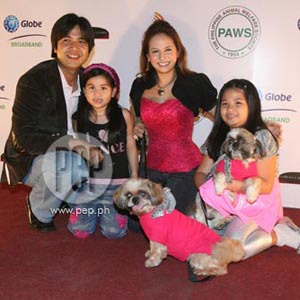 What a happy family portrait. Showbiz couple Regine Tolentino (2nd from right) and Lander Vera-Perez (left) pose with their daughters, Reigen (2nd from left) and Reigne (right)—and with their adopted "kids" Porky and Sparky (Shih Tzus).

Celebrities treated their four-legged "best friends" to a fine-dining experience in the first annual Charity Dinner of Philippine Animal Welfare Society (PAWS). The event dubbed as "Dinner with PAWS" was held last October 20 at the Bonifacio High Street, Bonifacio Global City in Taguig.

In attendance were more than 300 guests and over 120 dogs who all took part in raising P225,000 for the PAWS animal shelter. The said shelter rescues animals in distress and provides emergency medical treatment, low-cost pet spray, and neuter services to dogs and cats.

"It's amazing what a group of volunteers can do when they are driven by a passion to help alleviate animal suffering," said Nita Hontiveros-Lichauco, PAWS President. "While we see a lot of cruelty in our line of work, we also come across acts of great kindness and generosity."

Aside from the volunteers, celebrities also came to show their support for PAWS. Among these celebrities were couples Heart Evangelista and Jericho Rosales, with their cocker spaniel named Davies; and Dingdong Dantes and Karylle with their shih tzus named Jack Sparrow and Kung Fu. Regine Tolentino and husband Lander Vera-Perez also walked the red carpet with their daughters and their shih tzus named Porky and Sparky. Also spotted in the event were couple Agot Isidro and Manu Sandejas with their choco brown Labrador named Tyson and their beagle Elvis.