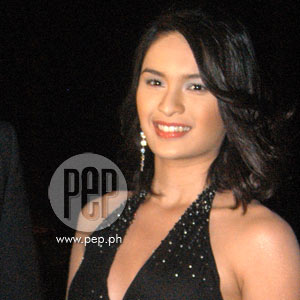 "Ever since, dati pa, feeling ko kasi talaga with guys my age, feeling ko kapatid ko. I like siguro being babied and being taken good care of," explains Pauleen Luna about her preference for older men.

Pauleen Luna insists that she works hard for her money and doesn't need her politician boyfriend to provide for her needs.

Sitting in as guest yesterday, November 4, in Showbiz Central, the young actress was grilled by Rufa Mae Quinto and Mo Twister about the origins of some of her reported properties.

"Just to clear it ha, 'yong ipinapagawa kong six-door apartment, nasimulan na namin ‘yon even before I got together with Sherwin," explained Pauleen. She was referring, of course, to her boyfriend, Valenzuela Mayor Sherwin Gatchalian, who is 15 years her senior.

Pauleen also revealed that her family had long been engaged in property dealings, such as condo units and townhouses.

ALWAYS THIRD PARTY? Before Pauleen hooked up with Mayor Gatchalian, issues linking her with attached young male celebrities had always hounded her.

Some of the couples mentioned by Mo include Diether Ocampo-Kristine Hermosa, Mark Herras-Jennylyn Mercado, and Dingdong Dantes-Karylle.

Pauleen gamely answered the rumor throwing her in the middle of Dingdong and Karylle's relationship.

The young actress was not comfortable though about tackling her rumored involvement with Diether. Some rumormongers reported that Pauleen almost caused the breakup of Diether and Kristine a few years back.

"I think everyone knows about that," answered Pauleen after a long pause, refusing to elaborate further.

In a file interview with The Buzz, Pauleen—who was still then connected with ABS-CBN—admitted that she was courted by Diether but that was before the hunky actor had a relationship with Kristine.

Pauleen added, "This was like two and a half years ago. Nagvo-Volta pa po ako noon, and this was before nagsama sila ni Tin [Kristine's nickname] sa Sana'y Wala Nang Wakas."

She then debunked the popular impression that she and Diether for a time became an item.

"Were you the third party in the relationship then?" asked Mo.

"Of course not," replied Pauleen before adding that she never dared dating committed men.

"Ibang landas ‘yon," she laughed. " Medyo mahirap 'yon but kind of complicated [for me]."

THE DEAL WITH OLDER MEN. "I've been frank naman about this. Ever since, dati pa, feeling ko kasi talaga with guys my age, feeling ko kapatid ko," she explained when asked why she's always been drawn to guys much older than her.

"I like siguro being babied and being taken good care of," added Pauleen.

As for the rumors saying that Mayor Gatchalian was often spotted dating other women, Pauleen quickly doused off the fire by narrating her boyfriend's hectic schedule.

"I talked to him about that and pinagtawanan lang namin," she chuckled. "I know his schedule. He's a businessman in the morning and a mayor in the afternoon, and at night, he has mga meetings din sa mga businesses nila. He's a very busy, busy guy. And the few times na free siya, he really makes it a point to visit me wherever I am."