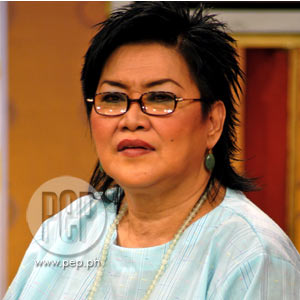 "Is Lolit Solis bending to the pressure?"

This was the question raised by some ABS-CBN employees yesterday, November 6, the moment they caught sight of the controversial talent manager loitering around the lobby of the Kapamilya network. She was carrying gifts.

In an article written today by Abante Tonite columnist Abu Tilamzik, he noted that many initially perceived Lolit's surprise visit as an indication that she was ready to make peace with Star Magic, ABS-CBN's talent management unit, in connection to the Piolo Pascual and Sam Milby issue.

As it turned out, Manay Lolit's agenda yesterday was to personally hand out her early Christmas presents to some employees working in the Accounting department, as well as to the staff of the shows where two of her talents, couple Christopher de Leon and Sandy Andolong, are appearing.

In a twist of coincidence, Lolit reportedly bumped into Sam's handler, who was also perplexed that the feisty StarTalk host was there.

NOT BACKING OUT. Lolit wasn't able to leave the vicinity of the Lopez owned network right away as she was cajoled by Cristy Fermin to guest in her radio program with Jobert Sucaldito.

The on-air conversation turned out fine, according to Tilamzik. Once again, Lolit apologized to both Piolo and Sam for whatever troubles her article caused them.

He even added that some fans of Piolo and Sam texted the radio program, accepting Lolit's apologies, at the same time expressing hope that the entire issue would finally be put to rest.

In related news, the demand letter written by the lawyers of Piolo and Sam reportedly reached the office of StarTalk yesterday, November 6.

Manay Lolit had initially stated her willingness to face whatever legal charges were being lodged against her.

Sam and Piolo are expected to arrive today, November 7, from Canada where they had a show together with comedienne Pokwang.