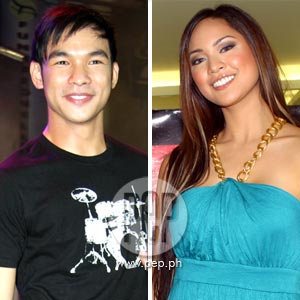 Beauty queen Riza Santos (right) opens up to Pinoy Big Brother co-housemate Jon Avila about the rumors linking her to singer Mark Bautista (left). "I don't know how things got so twisted and everything. I think it was just a misunderstanding and he [Mark] was kinda like me but I didn't like him. I don't how to tell people that I don't like them," said Riza.

Nabalitaan daw ni Riza na magma-migrate sa Canada si Mark para sa kanya. Ayon sa beauty queen, "While I was away, while I was in Canada, my best friend, she email me this link to YouTube and the heading was he [Mark] was migrating to Canada for Riza Santos. I was like, ‘Oh, my gosh!' I was so mad. For me, I felt disrespected."

Ayon kay Riza, ang unang pagkakataon na lumabas sila ni Mark ay nang dumating siya rito sa Pilipinas. Salaysay ni Riza, "I got to the Philippines and, like, after a week, I started contacting people that I'm here na. And then, he's like, ‘Oh, we should meet up. What are you doing tomorrow?' I'm like, ‘Well, I'm going to the mall with my family.' And then, he said, like, ‘Sama ako? Hihi' And I was like, ‘Hehe. You can come if you want.' And there's no harm in that and he seems like a nice person."

Nasundan pa raw ito nang minsan kasama niya ang isang kaibigan. Aniya, "I was hanging out with my friend at The Fort and we just had dinner at her house. And he [Mark] was, like, he wanted to meet up with us. We already ate but he hasn't eaten yet, so we went to a Japanese restaurant and we kinda waited for him while he ate."

"He had like a CD launch party and then he invited me to go. And then, I was like, ‘Okay, well, I'm gonna bring my family.' I went with my mom, my dad, my cousin, my two nieces. And then, the next day I was really surprised. He came out on UNTV, it was like...because they were interviewing him for a really long time and then I saw the interview the next day. It was like... They made it look like as if I was the only one there."

Aniya, "I was really mad. Like for me, I mean, it's come up a lot that I don't have a boyfriend and that's because I really wanna wait for someone that was, like, really important to me. It just bothered me because it was, like, him [Mark] and it was so public."

Paliwanag niya, "Well, I tried to make things clear. I don't like saying this out loud... That's what I told the news reporters and everything, but the article that came out sounds like, ‘Na-hurt si Mark Bautista sa pag-deny ni Riza Santos.' I hurt his fans, they got mad at me. They said I was, like, lying and things like that. And then, I came out on all issues with him."