Pops Fernandez and Martin Nievera almost bump into each other 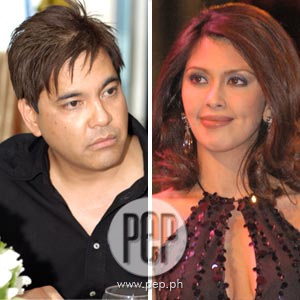 A month after that controversial YES! interview was made known to the public, former couple Martin Nievera and Pops Fernandez have neither seen nor talked to each other. Is reconciliation still possible?

Beyonce Knowles's concert at The Fort last November 7 would have been the first time for Martin Nievera and Pops Fernandez to see each other ever since the latter's controversial article in YES! magazine October issue and the former's emotional interview in The Buzz last October 7.

This afternoon, November 10, Entertainment Live's report confirmed that the former husband and wife did meet up at the said concert. Their statements, however, proved otherwise.

"I didn't see him, actually," Pops said. "Sobrang daming tao kasi, though I knew he was there."

Martin, on the other hand, wanted to see Pops and kept looking for her at the venue.

The two had been exchanging statements for the past month. A few days after the Concert Queen's revelation in YES! was released to the newsstands, Martin's initial reaction was "the best reaction [to the issue] is not to have one." But the very vocal dad of Pops's boys couldn't stop himself from talking.

When the press turned to Pops and asked her about the said issue, she admitted she was getting tired of it.

"Nakakapagod na rin di ba?" Pops explained. "I want to talk about other things, really. I kind of poured out my heart also [in the YES! article], and I think it's a sign na I'm done with that whole thing."

That said, Martin added that he wasn't counting on an invitation for Pop's upcoming "Diva-licious" concert since their relationship is still hanging by a thread.

He said, "It doesn't make sense that you write this 20-page article, then you say, 'I hope Martin comes to my concert.' Why? Why do you ask yourself that question? If I'm welcome at that show...I don't know. But I want to be in this concert. I should be in this concert because I'm her number one fan."

When informed about Pops' statement, Martin's response was: "If it's true that she has this chapter two, I hope it's a happy chapter."

Meanwhile, Martin's concern was also on his boys, Robin and Ram. He said they're definitely affected by the way things were going between their parents.

"It's very possible that Robin and Ram are affected, although, hindi sinasabi sa akin, hindi sinasabi kay Pops. Pag nag-uusap-usap kami ni Robin, nag-email siya sa akin na binasa niya ‘yong buong YES! magazine at na-shock siya. But he didn't believe everything. He remembered some things that were an issue when he was a little boy."

Now that Christmas is fast approaching, will Robin and Ram spend it with their dad, or with their mom?

"Ram will be coming to Las Vegas to join us, while Robin will be here with his mom, so it's going to be a weird Christmas," Martin revealed.