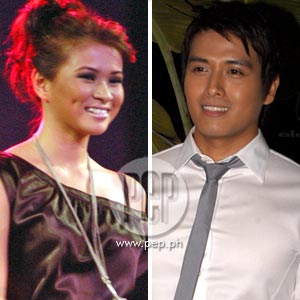 Sexy actor Alfred Vargas admits that his relationship with girlfriend LJ Reyes is currently experiencing some bumps. "'Yung kakulangan sa time, isa lang ang cure diyan, understanding, and that is what we are trying to work out now," said Alfred.

A few Sundays back, actor Alfred Vargas insisted that he and longtime girlfriend LJ Reyes were fine and that he was very happy with their relationship.

Yesterday, November 11, Alfred was back in Showbiz Central, this time candidly revealing that he and LJ are indeed going through a tough time because of time issues brought about by their conflicting work schedules.

Alfred and LJ have been quite busy of late because of their respective commitments. Alfred juggles his time between acting and his business ventures while LJ divides her time between studies and her showbiz career.

For now, the hunky actor reiterated that he wants to devote more time to think about his future. "Lumalaki na tayo. I want to be prepared pagdating sa future. I really want to be stable and feeling ko, bawat lalaki naman, ‘yon yung hangad."

Though the sexy actor never directly admitted it, he seemed to hint that they're currently in a cool-off stage.

Despite the imaginable tension, Alfred said that he and LJ seldom argue—something that he owes to familiarity and perhaps maturity.

"Hindi na kami nag-aaway," he proudly said. "We are way past that na kasi we know each other too well para pumunta doon sa bahagi na nag-aaway kaming dalawa."