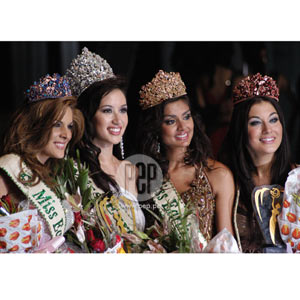 
A new queen was chosen yesterday, November 11, during the coronation night of Miss Earth 2007 at the University of the Philippines Theater in Diliman, Quezon City. Ms. Canada Jessica Nicole Trisko bested 87 other delegates for the title, which was previously held by Hil Hernandez of Chile.

Ms. Philippines Jeanne Angeles Harn of Montalban, Rizal, was adjudged the Most Photogenic for the competition. She is an account executive for an advertising agency, as well as a commercial and print model.

Ms. Venezuela Silvana Santaella was an early favorite among the contestants as proven by her two special awards—Best in Long Gown and Best in Swimsuit.

Another segment host that evening was 2006 Miss Philippines-Air Ginger Conejero, who also works as a showbiz news reporter for the Kapamilya Network. During the program, Ginger interviewed Ms. Canada Jessica Nicole Trisko, who told the audience, "I'm so grateful and so blessed to have this opportunity to represent my country. I wish the Filipinos so many blessings in return."

They were later trimmed down to eight finalists, who all showed off their winning form while wearing Filipiniana creations by Anthony Cruz Legarda. His collection was dubbed E3, which stands for "Earth, Ethnic, and Élan."

Ms. Canada, Ms. India, Ms. Venezuela, Ms. Spain, Ms. Georgia, Ms. Peru, Ms. Switzerland, and Ms. Thailand were then tasked to answer questions from eight environmental leaders to determine if they would move on to the final round.

MTV VJ Utt, who happens to be Thai, had to step in to translate for Ms. Thailand since the interpreter had some difficulty translating the contestant's answer.

For the final round, all scores are back to zero and they will be judged based on their answer to the final question given to all of them. The Final Four—composed of Ms. India Pooja Chitgopekar; Ms. Venezuela Silvana Santaella; Ms. Spain Angela Gomez Duran; and Ms. Canada Jessica Nicole Trisko—were given headsets so they could not hear the question and the response of the other contenders.

The host asked the ladies one by one: How would you describe the beauty of Mother Nature to a blind child?

After tallying the scores, it was finally announced that Ms. Canada Jessica Nicole Trisko is this year's Miss Earth 2007.

Ms. India Pooja Chitgopekar was proclaimed as Miss Earth-Air, the contest's equivalent of a first runner-up.