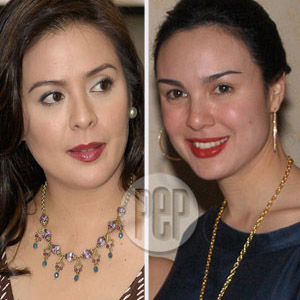 This question is bugging a lot of movie scribes as the two ravishing beauties are reportedly not on speaking terms again. This began during the pictorial of Pantene shampoo that Gretchen and Dawn endorse together with Ruffa Gutierrez and Angel Aquino.

Apparently, Dawn was peeved with Gretchen's prima donna attitude when they were doing the pictorial.

A source, who was inside the studio where the pictorial was held, narrated how Gretchen behaved during the shoot.

Gretchen arrived with a coterie of alalays, three yayas and five bodyguards—and a bagful of beauty products, all of them imported.

She immediately settled in a corner and asked her bodyguards to open her two big leather Louis Vuitton caches containing her makeup. As ordered, the bodyguards opened the caches and fixed the stands.

When Gretchen was shown the pair of shoes she would be wearing during the shoot, the actress volunteered to use her own. She then asked her yaya to open her three Louis Vuitton suitcases, which were full of shoes. Together with stylist Patrick Rosas, the maid obliged.

Gretchen was also asked to have her nails manicured in black. She laid her hand for the manicurist, but immediately pulled them away, asking "taga-saan ka?" Only when the manicurist retorted "Taga-Nail & Spa po," did Gretchen offer her hands for a manicure.

When La Greta got hungry, she asked her yaya to boil soup for her—lo and behold—she brought her own microwave in the studio. She also asked for fruits, which were stacked in an expensive plastic container.

After the shoot, Dawn reportedly texted her ire to Gretchen. The exchange of text messages got hotter with Gretchen reportedly saying "you’re not rich," to which Dawn retorted "you’re not married."

The two lovely actresses got involved in a spat a couple of months back when Gretchen felt bad that Dawn sided with Imelda Cojuangco, the mother of Tony Boy—Gretchen’s partner. Gretchen blurted her anger in an interview. But they have since talked about it and settled the issue. Until this unfortunate pictorial incident.

In an interview with the GMA-7 showbiz talk show S-Files last Sunday, November 19, Dawn refused to give details about her alleged feud with Gretchen. She said in a text message to S-Files, however, that they have talked about this and they are now okay.