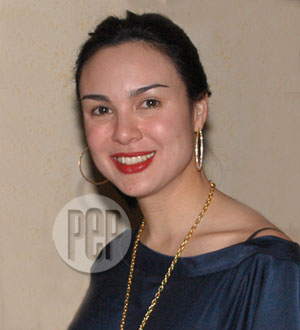 Gretchen Barretto, who has just come under fire for what has been called "prima donna" behavior, is talking back.

In an interview with PEP and YES! at the Holiday Inn in Ortigas Center, Pasig City, at four o'clock in the afternoon of November 23, the actress said she is very "hurt" by the prima donna tag. A prima donna is, according to the Merriam-Webster website, "a vain or undisciplined person who finds it difficult to work under direction or as part of a team."

At least one broadsheet and two tabloid columnists, plus a contributing writer for this website, have picked up the latest buzz on Gretchen, who is, admittedly, a magnet for gossip. Possibly because of her looks, which are considered extraordinary even by local showbiz standards, and her long-term relationship with a millionaire businessman with whom she has a daughter, Gretchen is often the subject of controversial prattle that go the rounds of dinner tables.

GRETCHEN ACCUSED OF SHOWING OFF. The prattle revolves around Gretchen's supposed behavior on the set of a recent commercial shoot where she appears as a celebrity endorser along with Ruffa Gutierrez, Dawn Zulueta, and Angel Aquino.

One columnist printed what she said was an email sent to her deriding how Gretchen practically brought her whole house to the shoot. It read: "As in, everyone was complaining kasi lahat halos ng gamit sa bahay dinala sa set just to show off her Louis Vuitton luggage. Gustong talbugan ang mga kasamahan niya!"

The website contributor wrote: "Apparently, Dawn was peeved with Gretchen's prima donna attitude when they were doing the pictorial...[Gretchen] arrived with a coterie of alalays, three yayas, and five bodyguards. She also came daw with a bag full of beauty products, all of them imported." The contributor added: "When La Greta got hungry, she asked her yaya to boil soup for her. And what do you know? She brought her own microwave to the studio. She also asked for fruits, with each fruit stacked in an expensive plastic container."

The 37-year-old actress says, her voice calm but her words rolling fast, "I'm not fighting with anyone. I don't want to have enemies. I like to be happy and I like people around me to be happy. I admit I got emotional about this in the beginning when I first heard about it, but I'm over that. More than anything, I am hurt. That's the feeling I have now. I'm hurt."

She goes on, "First of all, I don't think the mole knows what the meaning of prima donna is. When I accept a project, I come to the set ready. Everything I need, I have prepared. I have special food [atis, papaya] because I'm on a special diet to keep my weight [down]. I bring these in Gourdo's plastic boxes. They're just plastic, what's the big deal? ...I feel I don't have to explain why I have a microwave! It's only around two thousand pesos. That's just for heating my soup! What's so prima donna about that?"

GRETCHEN'S LOUIS VUITTONS. Saying that she has been bringing her Louis Vuittons to her shoots for years, Gretchen asks, "What's the big deal? I happen to have Louis Vuittons. These are maletas and bags. Di ko sila 'pinagmamalaki. I just have them. I put my clothes and shoes and makeup in them. These are things I need for the shoot.

"I know that my public expects me to look good, and I believe I deliver. In all my shoots, they [magazines, advertising agencies] text me the requirements for my shoot, and I come with more than what they asked for. I don't want anyone to say, ‘She's a prima donna and she didn't bring this and she didn't bring that.'"

She adds, "As far as my clothes, shoes, accessories, how much makeup I bring... whatever it is, hindi ko ninakaw yun. Those are gifts. Those are my things. I don't feel the need to apologize or to explain to anybody why I have them."

The brouhaha over the "branded clothes" and "three suitcases filled with branded shoes" that Gretchen brought to the shoot has her feeling hurt, she says, because this is so new to her. "I've been doing pictorials for many years," she says, wide-eyed. "I always bring this much. Nobody ever complained before. Nobody ever reacted violently like this before. I don't know why. I don't know what to think. But I am hurt-that's the feeling I have."

YAYAS AND BODYGUARDS. Gretchen also says she doesn't understand why there should be such a fuss about the "coterie" of people who travel with her. "People know that I travel with yayas and bodyguards. I don't deny that. So what's new? They say five bodyguards. I don't even know how many really. Or how many yayas I have. I just don't understand. The bodyguards are strictly bodyguards. They didn't play with my makeup. The ones who played with my makeup are the baklas, who have been working with me for a long time."

Going on the offensive, Gretchen says, "I really feel sorry for the mole that was in the pictorial because this girl must have a lot of hang-ups in her life for her to really watch me and watch everything I do."

Still referring to the mole as a "she," Gretchen continues, "I'm so sorry for that mole. She must be unhappy to be so inggit. Ako, I'm not inggitera. When I see a person live a good life, I am happy enough to be happy for this person. Parang, ‘My colleague, noong araw she worked hard. Now she's married, or with this person now—she's being taken cared of.' That makes me happy.

"Maybe it's wrong for me to expect people to be happy for me, but I don't expect people to have a violent reaction to how I live my life. It's not a sin that I live this kind of life. Wala akong inaapakang tao. Wala akong ninanakaw. Up to this day, I am working so hard. Gretchen is not just a princess who gets everything she wants, she can also work."

"That dialogue never happened," Gretchen says matter-of-factly. "Why would I say you are poor, especially if I know you are? Do I have to tell you something that is obvious? If what I have in my life is an issue with her, then that's not my problem. I'm here not to carry this woman's baggage. Obviously, she has a lot of baggage in her life and I can only pray for her."

Repeating that she does not want to fight with anybody, Gretchen says she is simply defending herself from this latest gossip. "I am okay with myself," the stylish actress says. "I cannot control other person's feelings, thoughts, or their baggage. I thought at first that, maybe, I should be guilty with what I have. But I thought, Why should I feel guilty?

"Prima donna doesn't mean having those clothes and shoes. I learned to work hard. I save up for something I want so I can get it. I'm just blessed that there's Tony [Cojuangco, her partner] who can give it to me now."

Gretchen, who prides herself in being professional about her commitments, adds, "Call me many things...mataray, whatever...but don't call me prima donna. Nobody can complain na late ako sa set o nagmamadali akong umuwi. I'm really professional. Kaya ako nagtagal sa industriya. I make sure that I arrive on time and that when I'm there everybody is happy on my set.

The actress, who has been working since she was a teenager, says, "I know I can't please everybody, that's something I have learned. But I will not apologize for the life I live. I am not gonna simplify my life for anybody. If it means you want my life, and you can't have it, then I'm sorry."

GRETCHEN AND DAWN IN EMOTIONAL MEETING. Gretchen now reveals that she and Dawn have met since the prima-donna issue hit the papers. They have kept the meeting under wraps, but with the issue getting picked up by the hour, Gretchen, who regularly answers every question thrown at her, is now speaking up.

Gretchen says that last Thursday, November 16, in their Dasmariñas home she and Dawn faced off. In that meeting, she says that Dawn admitted making the comments about her coterie of bodyguards and yayas and the big show of branded shoes and bags.

"We met about it," Gretchen tells the story. "Ruffa, Dawn and me, and Bettina [Aspillaga, from Backroom Inc.], and Ana Abiera [Gretchen's long-time friend]. We talked about it, and I just really wanted to know [the truth] because this prima donna thing came out in the tabloid, and we suspected her [Dawn]. Because yung stories, they were like hitting me lang. When we asked her, inamin naman niya."

Recalling the exchange of that afternoon, Gretchen says, "I nearly fainted when she told me because akala ko ako lang ang honest sa mundong ito. Aba, ako ang na-shock! Ruffa almost fell off her chair. Kasi nga we were all together in that commercial shoot. And we didn't know that Dawn was thinking any of these things about me."

Gretchen adds, "That's what's eating you up the whole time? The agency told us to bring whatever outfits we could bring to the shoot. We were all asked to bring white outfits, and my white outfits happened to be mga Balenciaga and Valentino and Inno [Sotto]. Yun lang yun. They said to bring, so I brought. In fact, I brought more pa. Anyone could have borrowed them. I have no problems with that. Everyone knows I'm generous with my things. Ask Nadia [Montenegro] and Ana [Abiera]."

RUFFA AND BETTINA AS WITNESSES. Bettina Aspillaga, who was present in yesterday's PEP and YES! interview, agrees. She says Gretchen likes buying beautiful things for herself, but that she has never been stingy about sharing them. Bettina, who handles Gretchen's commercial and magazine shoots for Backroom Inc., also says that she and Ruffa were surprised to hear Dawn's revelations. However, Bettina laughs, Ruffa—who likes to keep things light all the time—ended up barely speaking in the Dasmariñas meeting and just kept drinking the wine in front of them.

Gretchen asks, "Why will you react in a violent way? I actually asked her [Dawn], 'Sana naman you told me but don't stab me naman behind my back.' She mentioned that we had special treatment. Ruffa and I daw had our own makeup artists. That's true, I had Patrick Rosas. They asked me who I wanted to be my makeup artist, and I said Patrick. Ruffa said Steven. Dawn chose Lala Flores, who was also going to do Angel Aquino, so they had to share. That's not my problem, di ba?"

Gretchen says that she and Dawn said a lot of things that day to each other. They clarified the hearsays, they made people from the agency shed light on the confusion, they called up some staff involved in the controversial shoot. A few things they resolved; some things they left hanging in the exhaustion of the afternoon.

After a long and emotional meeting, Gretchen says, she and Dawn ended up hugging each other.

At press time, PEP and YES! have yet to get Dawn's side of the story.

For the full details of the Gretchen interview, read the YES! January issue, available in newsstands by December 20.