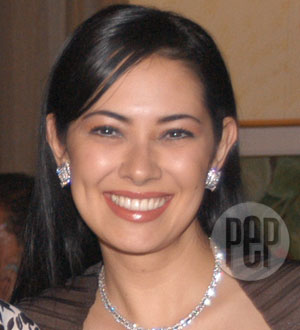 Ruffa Gutierrez-Bektas refuses to take sides in the reported tussle between Gretchen Barretto and Dawn Zulueta.

Both, she said, are her close friends.

Together with Gretchen and Dawn, Ruffa and Angel Aquino were also part of the controversial shoot of a shampoo commercial wherein the supposed feud started. Dawn had allegedly expressed her disgust over Gretchen’s “prima donna” ways in the shoot, wherein the latter was said to have brought a coterie of yayas, Louis Vuitton bags containing imported make-up, wardrobe and shoes, and a microwave oven, among others. Both actresses had since exchanged unpleasant text messages over the issue, a contributor’s feed that reached Philippine Entertainment Portal (PEP) on November 23 said.

Gretchen, in an interview with PEP, confirmed bringing the items but said was not a “prima donna,” a label that “hurt” her because she did not intend to make life difficult for her co-workers in the commercial shoot. She also denied there was an unpleasant exchange of text messages between them but confirmed she and Dawn had met in her Dasmariñas Village residence. Dawn, she said, admitted making comments about Gretchen’s controversial belongings.


Ruffa continued saying: “Our stylist si Liz Uy, sabi yung budget lang for the commercial was P20,000 for clothes. So if you don’t like our clothes, you can bring your own clothes. We need something white na gown. Siyempre all of my white clothes are in Istanbul. Hindi naman ako pwedeng magkasya sa mga model na size. She [Liz uy] instructed all the artists to bring their own clothes. I don’t know how come it became such a big issue.”

The host of upcoming show, Philippines’ Next Top Model added: “I’m just so excited to be part of a commercial. It’s been so long na wala akong commercial. There were changes made in the story board. Ang importante, lahat kami lumabas na maganda e. It’s the first time that we’re doing a commercial na kaming apat for a brand that we believe in.”