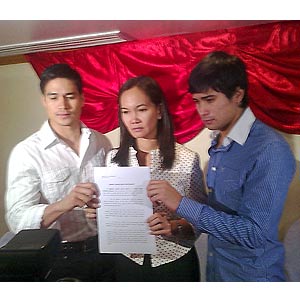 "We are suing because our dignity and integrity have been assailed and put to question. We are aggrieved by her article and her subsequent efforts to explain herself at our expense," said Piolo Pascual in his statement about the libel case he and Sam Milby filed versus Lolit Solis. Piolo and Sam were accompanied by their lawyer, Atty. Joji Alonso (middle).

Nakalagay sa joint complaint-affidavid nina Piolo at Sam na, "Up to this date, Ms. Solis has not made any public retraction of her article and even despicably insisted as to the veracity of her statements in subsequent publications and in her talkshow, StarTalk, aired over GMA-7. A purported apology was made by Ms. Solis during her talkshow. However, a viewing of the same would show that it was nothing but a travesty, which vilifies us further.

"In our absolute desire to clear our names, we again consulted our lawyers, this time with the view of filing a libel case against Ms. Solis and the editor of the publication [Veronica Samio]."

"After consulting with my family, my friends and legal counsel and after much thought and prayer, I have decided to file a lawsuit for libel against Ms. Lolit Solis.

"It was not an easy decision for me to make. As an actor, I know nothing of lawsuits and the time consuming legal process involved.

"Furthermore, I do not relish the idea of filing suit against a colleague in the industry. Especially someone who is my senior and who was once worthy of my respect.

"Respect is what this is all about. When Ms. Solis wrote her article published on Oct. 15, Ms. Solis disrespected and insulted me. What she wrote was baseless and a complete fabrication of events.

"Not only were we not at Sofitel, either singly or together on that date, but also we would never have behaved in the manner that she so graphically and maliciously recounted.

"We are suing because our dignity and integrity have been assailed and put to question. We are aggrieved by her article and her subsequent efforts to explain herself at our expense.

"She has disrespected us as colleagues and as human beings and the only way left to restore this respect is through the courts of law.

"We do not know why she concocted such a blatant lie. Nonetheless, we have given her every opportunity to retract her story and set things right. But our offer of a simple retraction and apology has been met not with contrition and truth but with ridicule and contempt.

"And so, with humility in our hearts and faith in God's divine justice, we now leave it for the courts to decide."

"We were not in Sofitel last October 12 so the entire article is a fabrication/concocted story. Worst, she didn't simply say we were nagbubulungan. The article, read in its entirety, shows that she herself was scandalized with what she saw. She pictures us in a romantic interlude awaiting the sunset, scampering like scared rabbits upon learning of her presence. Her article has damaged us and put us in public ridicule."